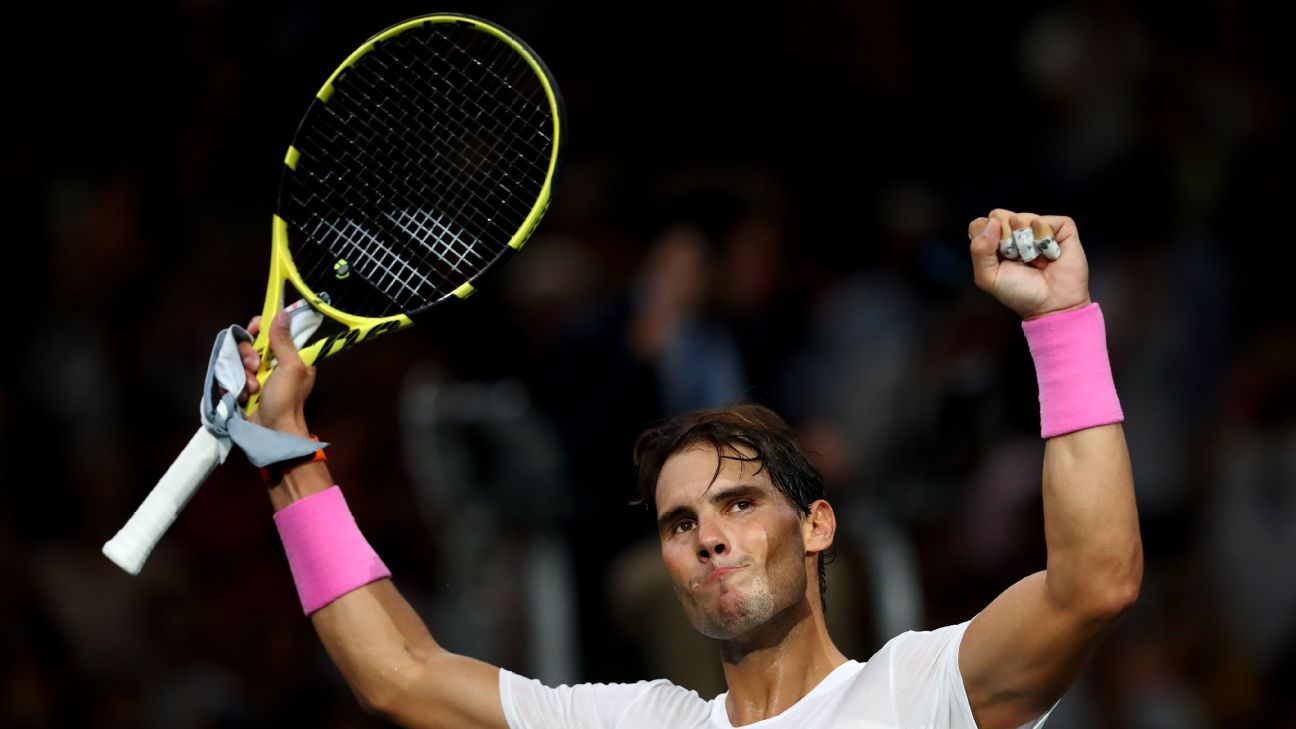 The two players share 22 Grand Slams, but Nadal has 19 of them and once again established a stranglehold on his Swiss opponent. Wawrinka’s blistering one-handed backhand was as erratic as it was occasionally superb, but Nadal was almost always in control.

“My serve worked well and the volley too,” Nadal said. “I went to the net a couple of times, serve and volley.”

The second-ranked Spaniard was briefly troubled in the first set, saving one break point in the second game and another in the eighth, and then needed some brief medical assistance in the second set for a stomach problem.

“Nothing important, honestly,” Nadal said, brushing away any health concerns. “During the match I was (asking) a little bit if just the doctor can give me something to feel a little bit better.”

Nadal next faces 2008 champion Jo-Wilfried Tsonga as he chases a first Paris title, which would guarantee him the year-end No.1 ranking for the fifth time.

Nadal leads Tsonga 9-4 in their career meetings, with Tsonga’s first win coming in the semifinals of the 2008 Australian Open — which remains the only major final he’s reached. He lost it to Novak Djokovic, who has since added 15 more major titles to join Nadal and 20-time Grand Slam champion Roger Federer as the game’s modern greats.

The top-ranked Serb is seeking a record-tying sixth year-end finish with the top ranking, and remains on course to meet Nadal in the final at Bercy Arena. Earlier, the four-time Paris Masters champion looked closer to his best level, reaching the last eight with a 7-6 (7), 6-1 win against Kyle Edmund.

After needing seven set points to clinch the first set, he reeled off six straight games in the second, finishing it off by breaking his British opponent to love with a two-handed backhand winner into the left corner.

He turned quickly to give his box a look of steely determination and former Wimbledon champion Goran Ivanisevic — who joined his coaching team at this year’s Wimbledon — stood to applaud him.

“It was because my coach told me I don’t have a great return. So finishing off with a return winner, I kind of gave him a look. No I’m joking,” said Djokovic, who is widely considered among the game’s greatest ever returners.

He served well, too, winning 89 percent of first serve points won and conceding no break points. He then peaked with three crisp winners in the last game, including another two-handed backhand and a pinpoint forehand.

“It is great to finish the match in style and to feel the way I felt in the second set,” Djokovic said. “I have not played my best yesterday, so of course I was hoping I can do as well as I did in second set. The look was about that.”

His voice still croaky, Djokovic addressed the crowd in his fast-improving French after the game. He told them in measured tones that he still felt a bit unwell, having labored at times against the unseeded Corentin Moutet in the second round.

He next faces seventh-seeded Greek player Stefanos Tsitsipas, who had 11 aces in a 6-3, 6-4 win against Alex de Minaur and holds a 2-1 record against Djokovic — including earlier this month in the quarterfinals of the Shanghai Masters.

Grigor Dimitrov advanced by beating Dominic Thiem 6-3, 6-2, breaking the fifth-seeded Austrian’s serve four times. The Bulgarian did not face a break point and next plays Cristian Garin, an unseeded Chilean who saved three match points in a 6-7 (4), 6-4, 7-6 (6) win against Jeremy Chardy.

Monfils would seal his place in the season-ending ATP Finals in London if he beats Shapovalov.