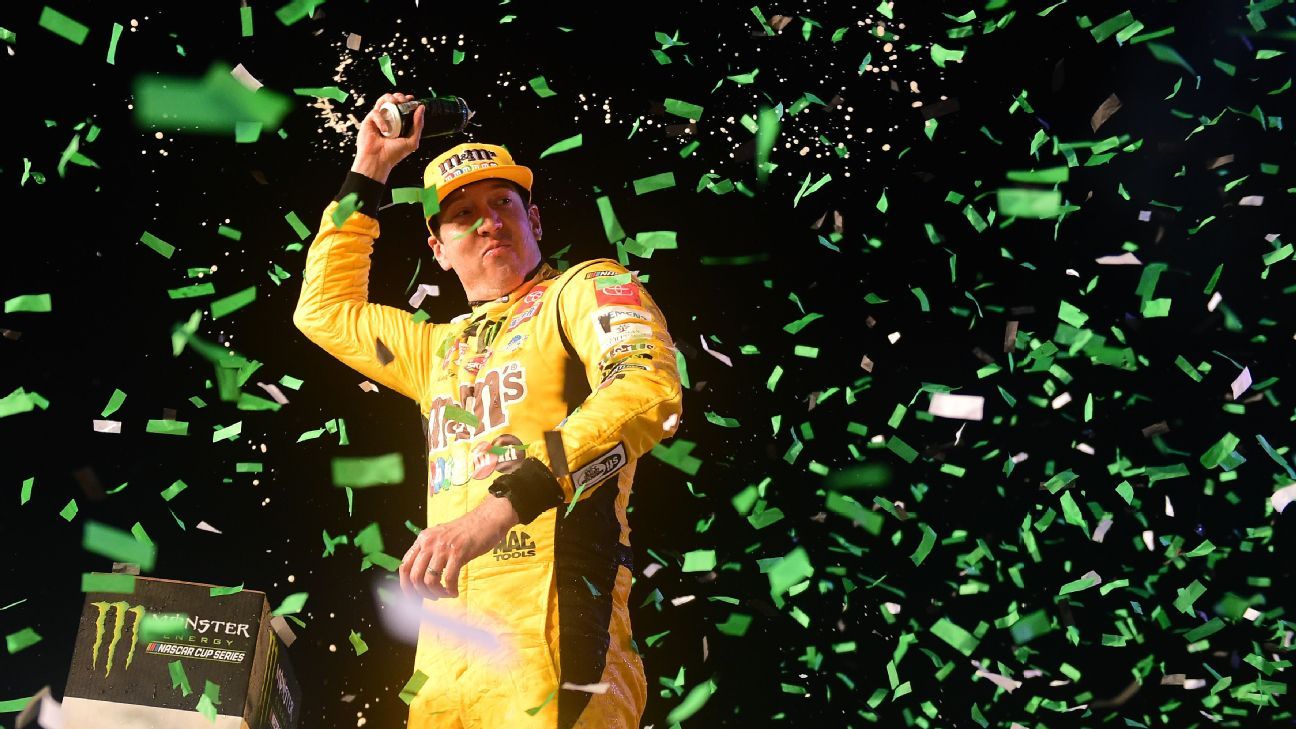 Kyle Busch captured his second Monster Energy NASCAR Cup Series championship and Joe Gibbs Racing dominated on the racetrack, winning a stunning 19 of 36 points races while becoming the first organization to put three of its four teams in the Championship 4 finale at Homestead-Miami Speedway.

Teammate Martin Truex Jr. finished second in the championship race while leading the series in wins with seven; Denny Hamlin finished 10th in the race, fourth in points and won six times.

Only Stewart-Haas Racing’s Kevin Harvick, who wound up third in points and won four times in 2019, kept JGR teams from finishing 1-2-3 in the final standings.

It was that kind of year for NASCAR, although there was more to the season than Busch and JGR. Much more.

Dawn of a new era

In early February, NASCAR announced one of its biggest changes in how it would police the sport, saying race winners could be stripped of a victory for certain post-race infractions. Four months later, officials did just that — stripping Ross Chastain of a win in a Gander Outdoors Truck Series race at Iowa when his truck failed post-race inspection. Brett Moffitt, originally second in the rundown, was awarded the victory.

We’ve seen this movie before

At 44, Johnson is the oldest active full-time competitor in NASCAR’s premier series. Primary sponsor Ally has extended its agreement through the 2023 season, however Johnson’s current contract runs only through the end of 2020.

Silence is golden (and a lot cheaper)

Bubba Wallace nearly got away with intentionally causing a caution period at Texas Motor Speedway in November — until he was asked about the incident a week later and all but admitted his actions were purposeful.

His comments resulted in a $50,000 fine from NASCAR as well as the loss of 50 driver points.

With a tire going down, the Richard Petty Motorsports driver spun his No. 43 Chevrolet during a round of green-flag pit stops, leading officials to throw the caution flag during the AAA Texas 500.

Asked the following weekend at ISM Raceway outside Phoenix, Arizona, if he was concerned about NASCAR reacting, Wallace told one reporter, “Until they do anything, no. I’m not the only one to do it.”

Wallace made his comments on Friday. The following morning NASCAR officials announced the penalty.

Not surprisingly, shortly after making the comments on the television program “NASCAR America,” Larson issued an apology. “I meant it jokingly but shouldn’t have implied they are anything but a strong competitor that gets better as the season goes on,” he said in a statement released to the media. “I appreciate the engine support we get from (HMS) as they are a major part of the reason we have been as strong as we are.”

Didn’t see that one coming

The season’s biggest stunner came in July at Daytona when Justin Haley, at just 20 years old and a rookie of the year candidate in the Xfinity Series, won in just his third Cup Series start with the Spire Motorsports organization. The underfunded outfit failed to crack the top 20 in the season’s other 35 races.

How did Haley and the team accomplish it? By staying out on the track instead of pitting following a caution period for a 17-car pileup and subsequent lightning delays. Officials were forced to call the Coke Zero 400 after only 127 of 160 laps when rain returned, with Haley and the No. 77 sitting out front.

Haley wasn’t the only first-time Cup Series winner. A week earlier, Alex Bowman had joined the list of all-time NASCAR victors when he captured the Camping World 400 at Chicagoland Speedway in Joliet, Illinois. Bowman, driver of the No. 88 Chevrolet for Hendrick Motorsports, lost the lead to Larson with eight laps remaining but retook the lead just six laps from the finish. He became the 18th different driver to win a premier series race for HMS.

Meanwhile, somewhere in the rulebook…

The 2019 season was the first with the full-blown high-downforce, lower horsepower rules package for the Cup Series and it drew mixed reviews as well as mixed results. Officials hoped the package would allow competitors more opportunities to pass by taking away some of the aero advantage enjoyed by the race leader under the previous aero rules.

There were tracks where that seemed to be the case, but others where the amount of passing and the number of lap leaders were minuscule.

Drivers complained often about how much more difficult it was to pass with the new package. And yet there were instances of drivers overcoming huge setbacks to score impressive wins.

“Our competition right now in the intermediate (1.5-mile) tracks and the superspeedways I believe is the best racing we’ve seen,” NASCAR president Steve Phelps said during his state-of-the sport address at Homestead just hours before the season’s final race.

“Do I think we need to work with our industry … to improve what we’re seeing on the short tracks? I do. We’re going to do that in the offseason for sure.”

In March, NASCAR officials announced major changes for the 2020 Cup Series schedule, including awarding the championship race to ISM Speedway in Avondale, Arizona. The move meant the end of an 18-year run as the championship venue for Homestead-Miami Speedway.

HMS remains on the circuit but will now host the Cup Series in March.

Other moves include moving the annual July 4 race at Daytona International Speedway to the end of August, where it becomes the final race of the regular season; the annual Bristol night race, a summer staple for decades, moves to September and will be the cutoff race of the first round; and a twin bill for Pocono Raceway that will see the 2.5-mile, three-turn track host two Cup races during a single weekend.

While the 2019 NASCAR Cup Series season had its share of contact on the track, things got physical off the track on occasion as well. Anyone surprised by that? Of course not.

In the “You Messed up my Qualifying Lap” category, the finalists were Daniel Suarez and Michael McDowell, whose brief scuffle on pit road took place at ISM Speedway in March. Who says NASCAR qualifying doesn’t mean anything to these guys?

In the “Rock ’em, Sock ’em” category, the finalists were Clint Bowyer and Ryan Newman for their brief exchange following the annual All-Star Race at Charlotte Motor Speedway. Newman’s share of the exchange was verbal and came moments after Bowyer accosted the Roush Fenway Racing driver while Newman was still seated in his No. 6 Ford.

And the winners are … Joey Logano and Denny Hamlin, two veterans of altercations on and off the track. Contact between the two at Martinsville in this year’s Playoff race led to a heated discussion on pit road afterward, and that led to a shove/slap by Logano, which led to a pit-road scuffle that included officials (trying to break it up) and crewmen (who may or may not have been trying to break it up).

Calling it a career

At least two veteran drivers, Paul Menard and David Ragan, announced the 2019 season would be their last as full-time competitors.

Menard, winner of the 2011 Brickyard 400, finished 19th in points this season driving for Wood Brothers Racing. He made 471 starts in NASCAR’s premier series.

Ragan, who made 470 starts, is a two-time Cup winner. In 2011 he won the Coke Zero 400 at Daytona while driving for Roush Fenway Racing. Two years later, he won the Aaron’s 499 at Talladega while competing for Front Row Motorsports.