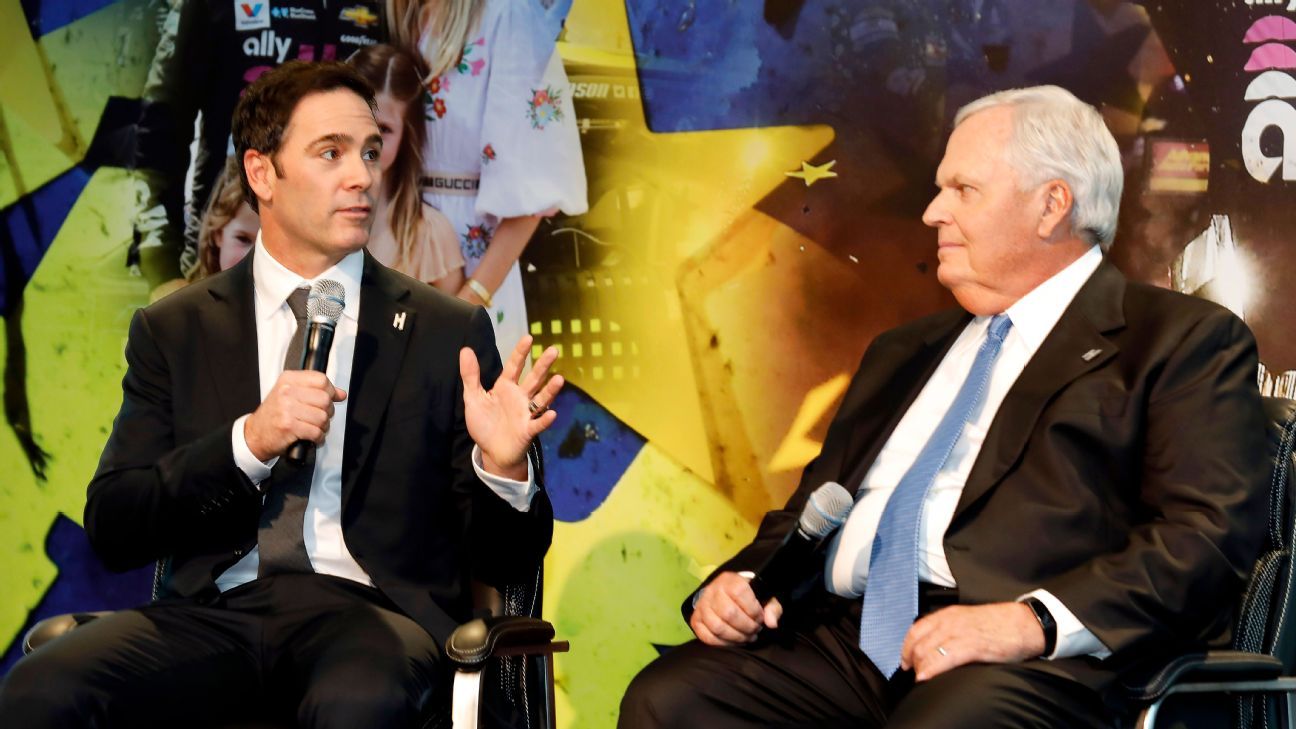 CONCORD, N.C. — Jimmie Johnson handed out mini bottles of Patron at his retirement announcement — so perfectly on brand for the cool Californian who stormed to a record-tying seven NASCAR championships yet somehow bored fans who found him too vanilla for their liking.

Nothing about Johnson was ever boring, though.

Certainly not as the unknown Xfinity Series driver in 2000 who slammed headfirst into a foam wall at Watkins Glen, climbed from the wreckage and raised his arms in triumph from the roof of his car. Or the time he tried to prove he could surf on top of a moving golf cart, only to fall and break his wrist weeks after winning his first championship. Horseplay at The Palms Casino with crew chief Chad Knaus after title No. 4 left both scrambling on the floor searching for a misplaced championship ring.

Now 44, Johnson has made friends with celebrities from practically every industry — musicians, actors, athletes, artists — and is legendary for a work hard, play hard mantra. His love of tequila is well-known, and the bottles celebrating him Thursday were a nod to the seven Patron toasts he did with his team during every championship celebration.

His work ethic made him the best NASCAR driver of much of the last two decades, and his desire to play a bit more certainly led to his decision to retire after the 2020 season. He said Thursday he made the decision earlier this fall and was at peace with it. He said he is committed to chasing a record eighth championship next year — but ready to take a break and spend more time with his family.

“This is not a retirement from driving race cars, this is slowing down from 38 races,” Johnson said, noting the length of the NASCAR Cup Series schedule. “A little more balance is really where that sits. This is not retirement from racing, this is stepping down for the 38 races and the commitment it takes to being competitive. I look forward to what might develop. I feel like I need to take a deep breath and see what comes from there, put my family first instead of racing first and see where that takes us.”

Making his 19th season the last one as a full-time racer was a decision Johnson has pondered for much of the year. He’s a planner, a processor, and wanted to figure out his plans by the end of this season.

He visited team owner Rick Hendrick in late October — “every time one of these drivers calls me and wants to come to my house, I know that’s not a good situation,” Hendrick quipped — and discussed his decision with Jeff Gordon, the four-time champion who believed enough in Johnson to convince Hendrick to build a team around the unknown driver all those years ago.

He made his decision public Wednesday, the same day he told his two daughters over breakfast and tried to show them a video detailing his decision. Six-year-old Lydia was more interested in her pancakes.

“She could not be bothered by the video and wanted me to pass the butter,” Johnsons said.

He said 9-year-old Evie is still “processing” the retirement, and the girls helped introduce Johnson at his news conference at Hendrick Motorsports. Flanked by a childhood dirt bike, a dune buggy, his famed No. 48 Lowe’s Chevrolet from his first championship and his current car sponsored by Ally, he was surrounded by those instrumental in his career. The audience included wife Chandra, former crew chief Knaus, current crew chief Cliff Daniels, NASCAR Vice Chairman Mike Helton and Gordon.

Johnson sat alongside Hendrick on a stage back-dropped with photos from his championship seasons. Johnson’s seven titles are tied with Richard Petty and Dale Earnhardt for the most in NASCAR history, and his five straight championships from 2006 through 2010 are unprecedented. His 83 career victories are tied with Cale Yarborough for sixth all-time, and two more wins would move him into fourth behind Gordon’s 93 victories.

But he’s mired in a 95-race losing streak spanning more than two years, had two crew chief changes this season and has been slow in the new car Chevrolet rolled out in 2018. Chevy has yet another new model set for competition next season, and Johnson is the grizzled veteran on a Hendrick lineup of Chase Elliott, Alex Bowman and William Byron.

Johnson said his decision is not based on performance.

“It’s had very little to do on making the decision,” Johnson said. “There’s a feeling I’ve been waiting for, I didn’t know when or why, but it did. In my heart of hearts it is not because of how we ran the last two years.”

Hendrick is hopeful a time will come in which fans will embrace the excellence they saw for so many years from Johnson. He could never understand why the driver wasn’t more popular.

“Sometimes people didn’t respect him because he was too perfect,” Hendrick said. “He could do it and be a gentleman, and race people clean. This guy was an unbelievable athlete, father … the stats speak for themselves but people are going to remember the man, Jimmie Johnson.”