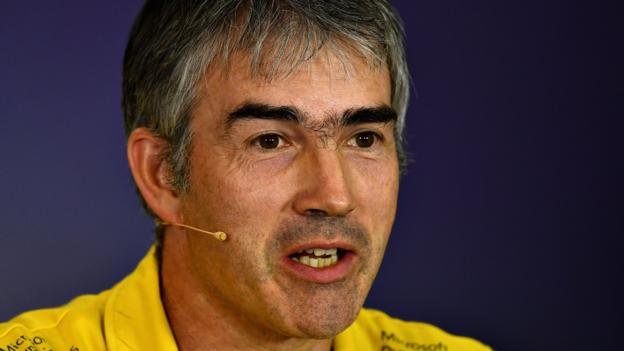 Renault technical director Nick Chester is to leave the French team after their difficult campaign this season.

Renault said the move had come as part of a “major restructuring” of the technical departments at their UK base in Enstone.

And it comes after the recruitment last month of Pat Fry, another high-profile, experienced engineer, into a role that has not yet been officially revealed.

Renault have slipped from fourth to fifth in the championship this year.

They started the season, after a period of major investment in infrastructure, with the aim of building on the fourth place they secured in the constructors’ championship in 2018 and closing the gap to the top three teams.

In terms of raw pace, Renault have moved forward – their average qualifying deficit to Mercedes in 2018 was 1.662 seconds and this has been reduced to 1.426secs this season.

But they have been leapfrogged by McLaren, who are a Renault engine customer, in the constructors’ championship.

Chester, 50, has been at what is known in F1 as “the Enstone team”, given the various guises it has taken, for 19 years.

He assumed the role of technical director chassis in 2013, following the departure of his predecessor James Allison to Ferrari.

Since 2017, Allison has been at Mercedes, where he has led the team through a continuation of a winning run that has now extended to six consecutive drivers’ and constructors’ championship doubles.

Fry’s recruitment was accompanied by other major changes at Renault, including the departure of chief aerodynamicist Peter Machin. He was replaced by Dirk de Beer, who had left Renault with Allison to join Ferrari, and subsequently moved to Williams.

A Renault spokesperson refused to confirm Fry’s specific role and said there was no comment on whether he was effectively a direct replacement for Chester.

Chester said in a Renault statement: “I have enjoyed 19 years in a team with great spirit and have worked with an incredibly loyal and talented group of people. I am looking forward to a new challenge and wish everybody in the team all the best for the future.”

Renault F1 managing director Cyril Abiteboul said: “Nick has been a key part of Enstone for almost 20 years. His passion for the team has never wavered, despite experiencing some extremely challenging times. More recently, his commitment, technical insight and enthusiasm have inspired us to move from the back of the grid to the front of the midfield.”

The changes at Renault come against the backdrop of an internal review being conducted into the car company’s entire operations.

This was announced in October by interim chief executive officer Clotilde Delbos, who has replaced former boss Carlos Ghosn following his arrest in Japan on charges of financial misconduct, which he denies.

Delbos made it clear the review was not specifically targeting the F1 programme but said that everything “is on the table”.