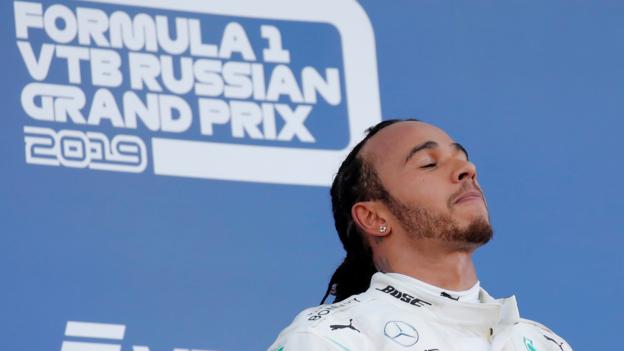 The promoters of the Russian Grand Prix say they are “confident” the race will go ahead despite Russia’s four-year ban from all major sporting events.

It means the Russia flag and anthem will not be allowed at events such as the Tokyo 2020 Olympics and Paralympics and football’s 2022 World Cup in Qatar.

The 2020 Russian Grand Prix is due to take place in Sochi on 27 September.

Promoters ROSGONKI say it would be “legally and technically impossible” to move the race.

“The contract for holding the Russian round of the Formula 1 World Championship was signed in 2010, long before the events investigated by Wada, and runs until 2025,” a ROSGONKI statement said.

“We are confident that the Formula 1 Russian Grand Prix will be held in 2020 and in the following years and invite everyone to Sochi. The ticket sales are in full swing.”

Formula 1’s governing body, the FIA, is International Olympic Committee-recognised and classified by Wada as a code signatory.