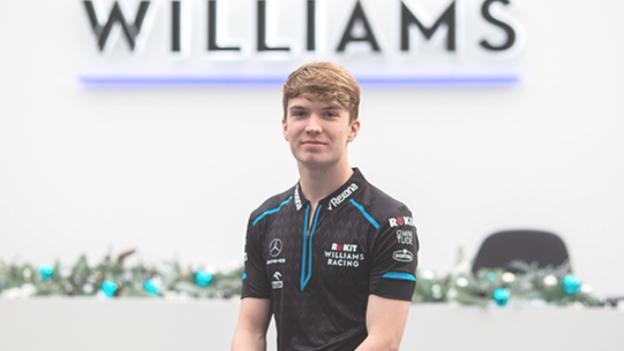 British hopeful Dan Ticktum has joined Williams as development driver for the 2020 season.

The 20-year-old will carry out work in the team simulator and attend two grands prix, alongside racing for the leading DAMS team in Formula 2.

Ticktum, who was dropped from Red Bull’s development programme last year, said joining Williams was a “privilege” and a “fantastic opportunity”.

“Working with the team will prove invaluable to my development,” he said.

Ticktum was on the Red Bull books for more than two years from 2017, working his way through the junior categories after a two-year ban in 2015 for overtaking several cars under safety-car conditions in the MSA Formula to deliberately crash into a rival.

He won the prestigious Macau Formula 3 Grand Prix – the category’s blue-riband event – in 2017 and 2018, and finished second in the European F3 championship in the second of those years.

But a move to the Japanese Super Formula championship proved the end of the road for his time at Red Bull and he lost his drive and backing from the drinks giant after just three rounds.

Red Bull never fully explained the circumstances behind the decision.

Team principal Christian Horner said: “It’s a scheme that is results-based and he’s had a tough time in Japan and it wasn’t working out.

“It was decided that he wasn’t the right guy moving forward as an option for either us or [junior team] Toro Rosso.”

Despite the decision, Ticktum re-emerged at the final round of the F2 championship in 2019 driving for the Arden team, run by Horner and his father Garry, before his move to DAMS for 2020.

“His ability behind the wheel has been demonstrated with back-to-back successes at the prestigious Macau Grand Prix in 2017 and 2018. Dan’s technical expertise will prove invaluable to the team and we are looking forward to helping him grow and develop in 2020.”