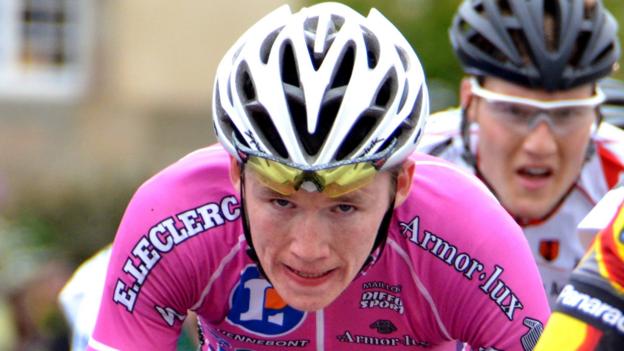 “It was a commitment that I made to myself and I was the ultimate failure – or that’s what it felt like.”

You see the success of professional sport every day. You read about it, you watch it and some of you may even be part of it. But what if it doesn’t work out?

That’s what happened to Daniel Stewart, who stepped away from professional cycling at the age of 21 after taking a leap of faith to pursue his dream.

After learning to ride at a young age, he followed his dad into a cycling club before deciding to give racing a go.

A bronze medal in his first race was a sign of things to come, and after completing his A-Levels the Belfast rider took the step of moving to Belgium to chase a professional career on the roads.

Despite representing Northern Ireland at the Commonwealth Youth Games and earning a professional contract in France, Stewart decided to step away from the sport at the age of 21 over concerns about his mental health.

Three years on from hanging up his helmet professionally, he admits that quitting the sport left him in a dark place, but he is a stronger person after coming through the other side.

“I always thought of being a full-time athlete, just not necessarily a cyclist,” reflected Stewart.

“When I was growing up, I cycled because I liked that independence and eventually I wanted to give racing a go. Then I caught the bug.”

After finishing school, Stewart moved to Belgium in his bid to become a professional cyclist and says the move to live abroad “wasn’t that big”.

“There was always such a massive push to make you go to university, but by the time of my A-levels I was disconnected with school life,” he added.

“When you do something like that, you can’t think of the fear of failure. If you fail, you fail. But if you don’t try then you will never know.

“I’m never going to have that thought in my head because I gave it a go. I still hold that philosophy in anything I do.”

Stewart managed to work his way up to the third tier of professional cycling in France, which, to put it in footballing terms, is the League One of the sport.

“I was in the bottom tier in terms of salary, but it was very similar in terms of the lifestyle and the races you are doing,” he added.

“It takes your life and that’s the part that wears you down I suppose.

“Doing anything obsessively just isn’t good for me. I need to have a lot of things on the go. Even now, I sometimes think about riding full-time, but I know that it would just end up the same way.

“That obsession made me insecure. All of a sudden, you are fixated on all the faults. You go to all the races and think about everything that you did wrong, instead of celebrating a lot of things that you have done right.

“If you are very self-centred and you only think about yourself, then being a professional athlete is almost easier.

“Whereas, if you do care what other people think, then that is going to weigh you down a lot. Those are the things that you have to eradicate, and that is something that I struggled to do.

“I still love cycling and I hold so much respect for those who do it professionally. I don’t hold any jealousy for those who are able to do it.”

Now three years on from giving up cycling, Stewart said cycling will always play a big part in his life.

“You’re selling your soul to someone. You ride for their team so you do exactly what they want.

“I think prior to being a full-time athlete, or for people who’ve never been one, it’s reasonable to think that talent and hard work will get you to the top.

“I learnt the hard way that support is as important for success. If you are a phenomenon, support takes care of yourself – I was not.

“My family did everything they could to help me, but there is only so much they can do when, in my eyes, it seemed the only pathway for success was to live in a rural village in Brittany on my own, from February to September.

“That’s hard – and looking at the Irish Cycling scene from the outside, I don’t think this has changed much since I left.”

‘You lose your identity’

Reflecting on his decision to quit the sport, Stewart described it as the hardest call he has ever had to make, and admitted he still gets emotional when thinking about it.

“I was definitely in a really bad place after it, even one or two years after it,” he explained.

“You just don’t know who you are. You almost lose your identity. It’s not just that I was quitting professional cycling, I was ‘Daniel the Cyclist’.

“It takes a lot to rebuild that again. I’m all the better for it now but it wasn’t easy.

“It wasn’t nice to say that the thing that you love, in my case it was cycling, knowing that you can’t do it for a living.

“You just cocoon yourself like you would with any stage of depression. It was almost like a grieving process.

“You just have to find your own way, regardless of how long that takes, and just accept that you don’t know who you are sometimes.

“You learn a lot about yourself and you get a lot of maturity from that. It wasn’t a wasteful experience, that’s for sure.”

Looking for ‘a fresh start’

Does that make Stewart a failure just because he had to step away from his dream? Not in the slightest.

He now has a full-time job in London and lives with his girlfriend in Kent. On top of that, the English countryside means he can still enjoy his passion without the pressures that are attached to professional sport.

“It was all part of my journey,” he reflects. “Looking at it retrospectively, it was a lot to do about how I didn’t have much control over anything that I was doing.

“When I started cycling, it was about escaping everyday life but once I got that professional contract there are a lot of things you can’t determine.

Despite moving away from the pressures of the sport, Stewart says he is still in love with riding his bike.

“I may still ride my bike for four hours a day in the countryside, but I still have 20 more hours to enjoy and do other things,” he added.

“Looking back, I don’t really know what I can change because I am the same person. I don’t have any regrets about it.”