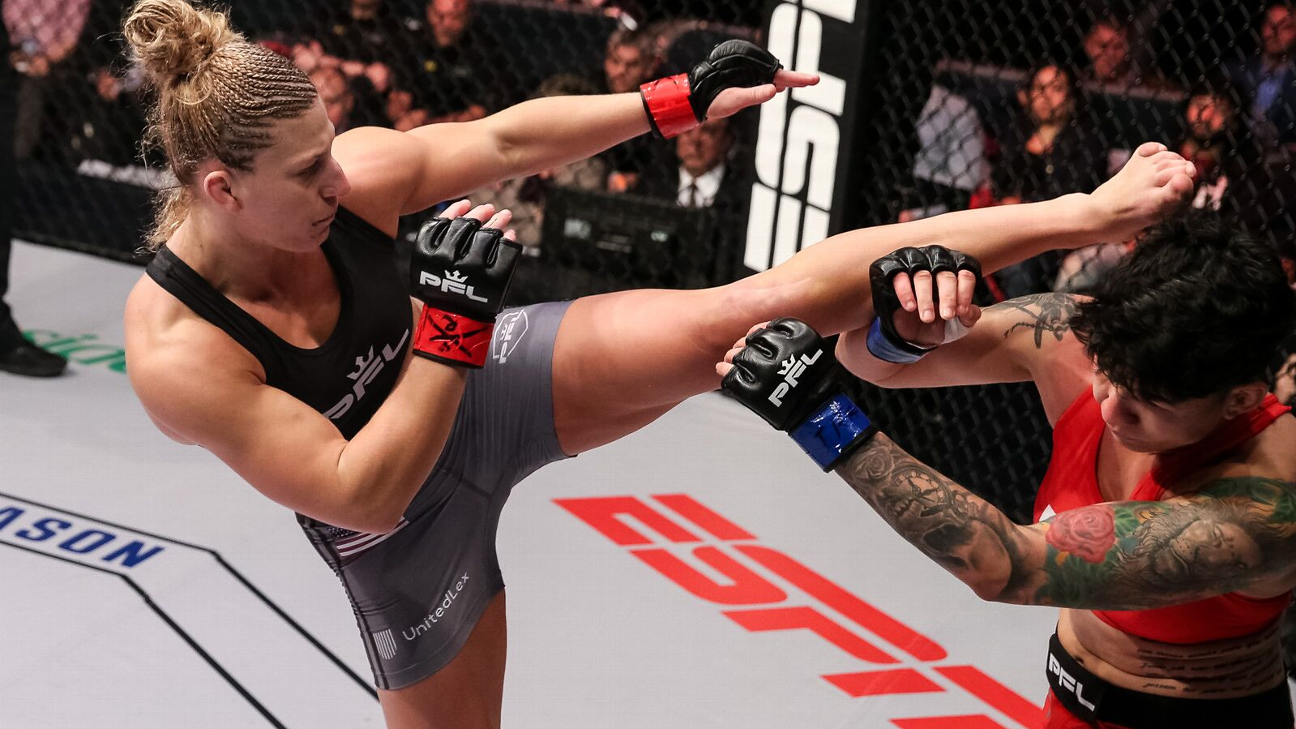 Kayla Harrison left the cage, her head sank and tears welled up in her eyes. She stopped to hug one of her coaches, and then her manager, Ali Abdelaziz, escorted her backstage with his arm slung over her shoulder.

For those who watched the 20-second clip on social media, it looked like Harrison had suffered her first professional defeat in mixed martial arts. That’s not what happened. In fact, Harrison won the fight against Larissa Pacheco by unanimous decision to open the PFL season in May. But she didn’t get what she really wanted: a finish.

It was in that moment when the PFL brass sitting cageside knew exactly what they had in Harrison, the 29-year-old Ohio native and former two-time Olympic champion in judo.

“She has a high standard for herself every time she competes,” PFL CEO Peter Murray told ESPN. “When we saw her reaction, while she won, she didn’t meet her own expectations — striving for excellence. That’s what it takes to be great. That was a human moment that she shared with her fans, with us. It was on display. And it said something about Kayla as a professional.”

The PFL has invested in Harrison as the face of its fledgling promotion, and so far it has paid dividends, inside and outside the cage. Harrison is a budding MMA superstar, and she and the promotion have a strong, symbiotic relationship. Before there were enough women to fill out a division, the PFL showcased Harrison in three fights to introduce her to the audience.

Then, in 2019, seven other fighters were brought on board and a 155-pound women’s lightweight division was born, centered around Harrison. Despite the early disappointment, Harrison made it through the 2019 season undefeated and will face Pacheco in the PFL women’s lightweight finals Tuesday at Madison Square Garden’s Hulu Theatre.

For Harrison, the PFL championship is a crack at $1 million and a chance to finish Pacheco, which she could not do nine months ago. For the PFL, it’s another chance to put Harrison at the forefront. But even with Harrison’s profile on the rise and her lofty goals, there are questions about whether she’ll outgrow the PFL.

Harrison said she’s signed on through the 2020 season, and beyond that is unknown.

“Obviously, I want to go down as one of the best to ever do it,” Harrison said. “Hopefully, that means I can stay with the PFL. But ultimately, I have to do what’s best for me and my career and my goals and my dreams and desires. So after next year, who knows? But I’m hopeful that the PFL can bring in the top talent and I can stay with the company that I believe in. We’ll see.”

The long-term prospects for Harrison and the women’s lightweight division as a whole boil down to the level of competition. In MMA, there is little depth and there are few well-known names in the weight class. Even women’s featherweight (145 pounds) is so thin that the UFC is having issues building a division. Former champion Cris Cyborg just departed for Bellator after long-standing issues with the promotion.

The PFL’s 2019 lightweight season had several fighters moving up from 145 pounds and a few — like former Strikeforce and Invicta FC women’s bantamweight champion Sarah Kaufman — coming all the way up from 135.

What frustrates Harrison is that many women’s fighters who compete at 145 and 135 walk around at about the same weight she does. Yet they choose to cut a lot of weight, which she would prefer not to do. Harrison, who is a broad-shouldered 5-foot-8, believes she could make 145 pounds, but doesn’t necessarily want to.

“I just don’t believe in it,” Harrison said. “It sends the wrong message to young kids, young girls. I think we do a sport that we get punched in the face and you dehydrate your body and what protects your brain is water. Dehydrating your body to make a specific weight and then 24 hours later asking it to recover and get in a cage and take damage, that is extremely dangerous.”

Despite the risks, cutting weight is part of the culture of MMA. Murray said a decision has not been made for 2019 whether the PFL will have a 145- or 155-pound women’s season. He said the promotion is currently scouting and recruiting for both weight classes.

If it were completely up to Harrison, she’d fight at 155 pounds her entire MMA career. Harrison competed in judo in the 78 kg (about 172 pounds) division, and she said she walks around somewhere between 160 and 165 pounds. Harrison is also hypoglycemic, which further complicates matters.

But she said she has a “strong desire” to test herself at 145, just because she knows there’s steeper competition there.

“I didn’t come to MMA to collect a paycheck, despite what people may think,” Harrison said. “I came here because I want to challenge myself.”

In Harrison’s perfect world, the PFL would have signed Cyborg and the two could have been inserted into a 155-pound season in 2020. It would have given Harrison the opportunity to test herself against an all-time great.

“That would have been my dream come true,” Harrison said. “I didn’t think she was gonna sign with us, to be honest. I don’t think it’s all about me, but I think it’s probably part of that. She probably wouldn’t have enjoyed the format. From what I understand, she likes to handpick her opponents. That doesn’t happen in the PFL.”

“I just don’t believe in it. It sends the wrong message to young kids, young girls. I think we do a sport that we get punched in the face and you dehydrate your body and what protects your brain is water. Dehydrating your body to make a specific weight and then 24 hours later asking it to recover and get in a cage and take damage, that is extremely dangerous.”

Kayla Harrison on her aversion to major weight cuts

While it wasn’t the right fit for Cyborg, you couldn’t find a much better match for Harrison and her goals than the PFL at this stage in her career. The merit-based format fits right into the two-time Olympic gold medalist’s vision, and eliminates a lot of the issues that initially dissuaded Harrison from pursuing a professional MMA career. Athletes having to make a promotional push or talk trash, as is often the case in UFC and other promotions, wasn’t appealing to her. Harrison didn’t like the idea of getting main-event spots and money based on a popularity contest.

When she looked at her options, the PFL was a perfect fit out of the gate.

“Kayla chose the PFL, because we are a meritocracy,” Murray said. “It speaks to her as a professional athlete.”

But no matter how averse she is to playing the game, Harrison’s goal of being one of the best MMA fighters of all time might conflict with that platform down the road. The UFC is the undisputed No. 1 MMA organization on the planet and is very much driven by promotion and which fighters can put the most butts in the seats and get the most eyes on pay-per-view.

Harrison could potentially do both of those things, although she has a different style than her former judo roommate Ronda Rousey. She isn’t just a promising fighter with the potential to be great; she’s a future star in the making. Harrison knows what the public perception would be if she never fought in the UFC, but she also said she’s not sure if she cares what others think.

“I don’t think that fans or people would consider me one of the greatest if I didn’t step in the Octagon,” Harrison said. “So, we’ll see.”

For now, the partnership between Harrison and the PFL is symbiotic. Murray said broadcast viewership spikes for PFL on ESPN+ or ESPN2 when Harrison fights. So does the promotion’s social media engagement.

“She’s a definite game-changer for the PFL and the sport of MMA,” Murray said.

Harrison (6-0 with five finishes) said she doesn’t mind being the “golden girl” or “poster child” of the PFL. She was that for USA Judo for many years, and Harrison wouldn’t have it any other way, even if she’s only six fights into her MMA career.

“It’s a privilege and I enjoy that,” Harrison said. “I also thrive under the pressure. I shine under the lights. That’s what I love to do. Bring it on. Let it rest on me — I’ve got big shoulders.”

As well positioned as she is to finish out the season with $1 million in her pocket and a continuing role as the face of the promotion, Harrison can’t overlook Pacheco. Harrison said she did something like that in the 2015 judo world championships when she was thinking ahead to rival Mayra Aguiar and ended up losing to unranked competitor Yoon Hyun-ji in the second round.

“I’m always thinking about the big picture, but I don’t focus on it,” Harrison said. “I’m a very live-in-the-now, be-present-in-the-moment type of person. I think about my goals every night and I visualize myself winning and I visualize what my life is gonna look like and stuff. But all I do is put one foot in front of the other every day. That’s how I get from Point A to Point B.”

Harrison left the cage in tears May 9 in Uniondale, New York, when she wasn’t able to finish Pacheco. She doesn’t plan on giving the judges any work this time around. The rest can wait until 2020 and beyond.

“The Kayla that beat her in May?” Harrison said. “That Kayla would get her ass whooped by me today.”