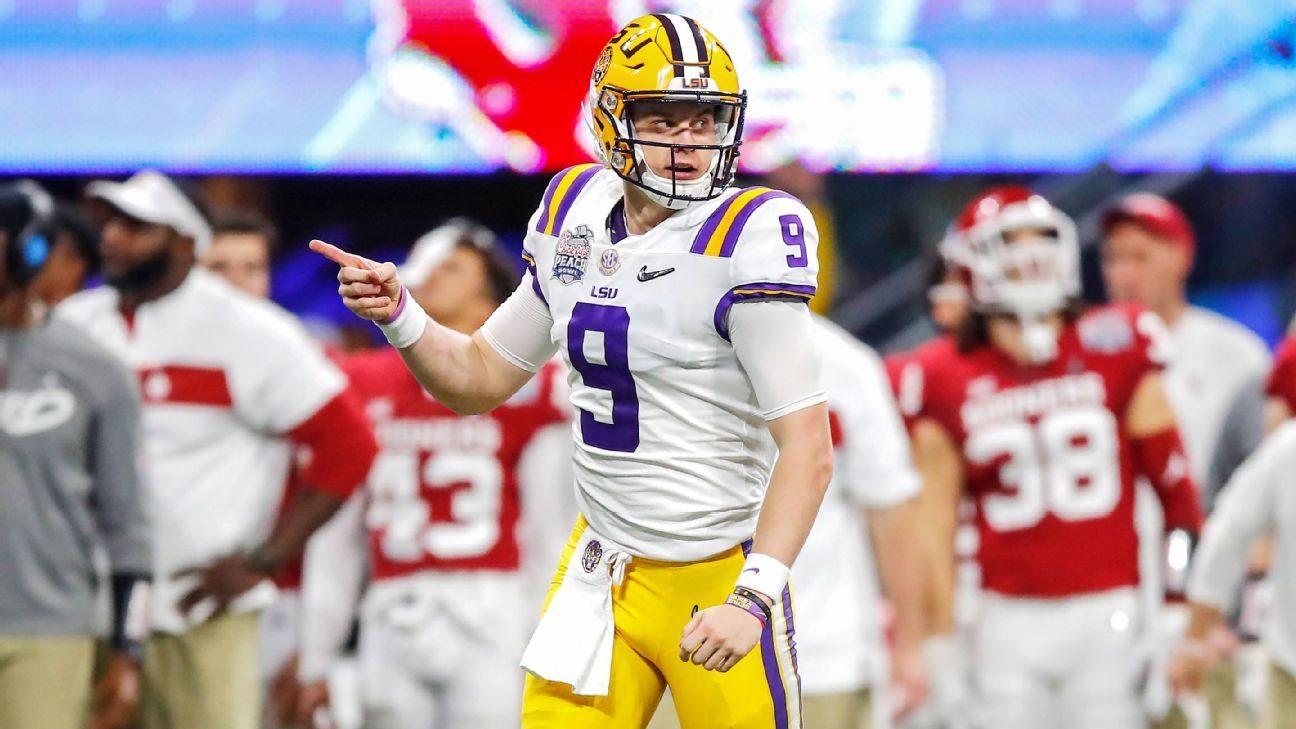 ATLANTA — THE PARTY started weeks ago. In Louisiana, this was all a foregone conclusion. A national championship game is to be played, in New Orleans of all places, and so of course LSU would be there. This was destiny.

The Tigers players knew it, too. They spent the past two weeks watching film of an undersized, undermanned, overmatched Oklahoma, and they knew how this would end.

“It’s conversations we had all week,” tailback Clyde Edwards-Helaire said. “We knew we’d put up 40 or 50.”

Turns out, that was just the start.

By the third quarter Saturday, a sizable portion of the party had already spilled out onto the streets of Atlanta. There was no drama to be found inside Mercedes-Benz Stadium, where Joe Burrow and LSU’s electric offense utterly embarrassed Oklahoma during a first-half onslaught, and rounded out a 63-28 win in the College Football Playoff semifinal at the Chick-fil-A Peach Bowl. It all came so easily.

What remained of the LSU crowd at the end, a few thousand revelers in masks and makeup, stood and chanted, a call and response. Joe. Burrow. Joe. Burrow.

A sheet, spray painted in purple and gold, hung in the far end zone, a rudimentary drawing of the state of Louisiana, captioned: “N’awlins, we’re coming.”

A Louisiana party is always a movable feast, and for the second time in a month, scores of LSU faithful invaded Atlanta, overwhelming the streets and hotels and bars and restaurants with chants of “Geaux Tigers.” But this was a warm-up act for the great homecoming.

On Saturday, that date with destiny was officially accepted in as emphatic a statement as any team has delivered this season, and now, the Tigers are headed home for one final showstopper.

“The state of Louisiana is going to be on fire,” said head coach Ed Orgeron, a Louisiana native whose raspy Creole-tinged voice has become the soundtrack to a dream season.

Funny thing is, a year ago, this was little more than a collection of misfits. Burrow, the cast-off from Ohio State. Orgeron, the coach no one else wanted. LSU, the seemingly typecast second-fiddle to big, bad Alabama.

And now here they are, poised for a national title, headed back to New Orleans.

A FEW DAYS before he accepted the Heisman Trophy, Burrow was contemplating this strange journey from Ohio to the bayou, from cast-off QB to the best player in the country.

Could he have ever seen this coming?

Joe Burrow explains that it’s going to be a lot of fun playing in New Orleans for the CFP National Championship.

Even in a place like Louisiana, where swagger is a birthright, Burrow brings a little something more. It’s part chip-on-the-shoulder, part confidence that comes with immense talent, but also it’s partly an ability to see the dream so clearly that he can simply will it into being.

Burrow’s teammates at LSU have gotten used to that. They’re sold now, too. There’s nothing their QB can’t do, so why doubt even the boldest prognostications?

Friday night, Burrow found lineman Saahdiq Charles in the team hotel and offered a prediction for the game.

“I’ve got seven for you,” Burrow said.

Charles grinned. Seven TDs in a game sounded about right.

“I didn’t know he meant seven in the first half,” Charles said.

But that’s what Burrow delivered Saturday in an absolute dismantling of Oklahoma’s defense. Burrow threw touchdown passes on seven of LSU’s first nine drives, finishing the first half with more than 400 yards passing, etching his name into postseason history.

Afterward, Burrow shrugged off the performance. It wasn’t his best, he said. Some decent throws, some great plays from his receivers. There’s more in the tank. That’s terrifying.

“We go into every game thinking nobody can stop us,” Burrow said. “We think we need to score on every drive. That’s just the way we think.”

LSU’S OFFENSE has created problems for Dave Aranda, too. He calls it a type of psychological experiment, a battle of wills with the uproarious offensive attack and his desire to stay angry.

“The offense comes out and is excited because they just scored again,” Aranda said, “and we’re like, ‘No, don’t smile. Be pissed off.'”

The Tigers played angry through much of Saturday’s game, even if Aranda isn’t satisfied. Aside from a big-play to CeeDee Lamb that set up an early TD for Oklahoma, the once-dominant Sooners’ offense looked utterly perplexed. LSU was up 35-7 before Oklahoma crossed the 100-yard mark for the game, and Jalen Hurts, playing in his fifth College Football Playoff game, was overwhelmed. He completed just two of his first 11 passes and tossed an interception that led to another LSU touchdown.

Aranda said he was surprised by Oklahoma’s lack of offensive identity early. The Sooners threw a handful of gadgets at the LSU defense, but the Tigers were prepared. By the time Oklahoma found any sense of rhythm, there was no hope for a comeback.

And all of that should’ve been yet another check mark in defense of this unit, a group that spent too much of this season shouldering the criticism that used to go to the offense. Not for Aranda, though. LSU allowed 28. Back to work.

“You look at the scoreboard,” he said, “and I have to do better.”

LSU RECEIVER Ja’Marr Chase stooped in front of his locker, pulled off his jersey and held it up, marveling.

Sure, he knew LSU would win this game, knew his offense was electric. It was only now though that the magnitude of it all began to sink in.

“This one’s going on the wall,” he said.

Chase, the Biletnikoff Award winner as the nation’s top receiver, finished his day with just two catches and 61 yards. That’s what was so crazy, he said. Shut down the nation’s best receiver and LSU will still hang 63 points on you.

Truth be told, Chase said, he was thinking 45. Seemed like a good number. It’d be an impressive performance against the No. 4 team in the country. Instead, LSU had 49 at the half.

That number stopped Chase in his tracks.

“Really?” he said. “We had 49 points in the half? I didn’t even look at the score until the third quarter.”

Why bother watching the scoreboard? LSU knew the outcome when it got off the bus. Chase said the receivers joked before the game, looking at Oklahoma’s corners and remarking on the diminutive stature of the group.

“It was just a bigger and better scenario,” WR Justin Jefferson said.

Watch Burrow scramble to the sideline midway through the first quarter, heave a pass down the sideline into traffic, and see Terrace Marshall Jr. come down with it for a huge gain, then ask how any DB is supposed to stop that. Or see Marshall, just a handful of plays later, secure a touchdown grab while falling backward with a defender draped across him. Oklahoma had no chance.

“I don’t see how a defense can stop us,” Jefferson said. “It’s just a blessing to be in this situation.”