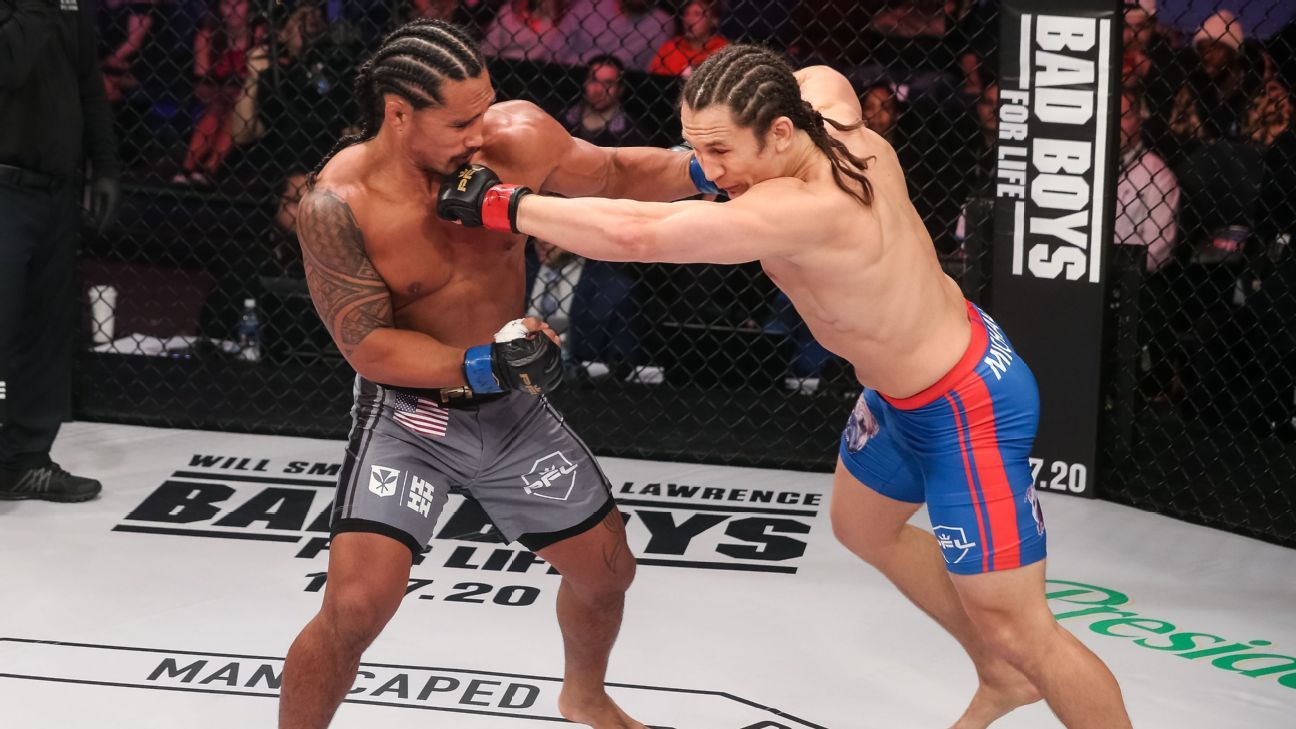 NEW YORK — Kayla Harrison entered the 2019 Professional Fighters League season as the face of the organization, and ended the year with $1 million and the PFL women’s lightweight championship in hand on New Year’s Eve.

Harrison, a two-time Olympic gold medalist, was one of six fighters to win titles and $1 million paydays Tuesday at the Hulu Theater at Madison Square Garden and closed the night with her victory. Lance Palmer (featherweight) and Natan Schulte (men’s lightweight) each repeated as champions, with Emiliano Sordi (light heavyweight), Ray Cooper III (welterweight) and Ali Isaev joining Harrison as first-time PFL winners.

Harrison absorbed more damage against Larissa Pacheco than she had in any of her three previous PFL tournament fights, including one devastating knee in the third round, but thoroughly dominated the action for the majority of each of the five rounds. Judges scored the fight 50-43, 50-45 and 50-45. Harrison had previously defeated Pacheco in her opening fight of the 2019 PFL season, though her disappointment at not finishing the fight brought her to tears in the cage the first time around. On Tuesday, Harrison was all smiles with her first pro MMA title and a massive payday in hand.

In the penultimate fight of the night, Cooper landed a devastating body shot on David Michaud and finished him with punches on the ground, earning a second-round TKO at 2:56 to win the PFL welterweight championship. Cooper (20-7-1) was the runner-up for the PFL welterweight title in 2018. It was an unfortunate full circle moment for Michaud (18-6), who opened the season with a 17-second loss to Sadibou Sy with a similarly effective kick to the torso and fought all the way back to the finals.

In a battle between a three-time All American wrestler and Olympic wrestler, Russian Olympian Isaev persevered by TKO over Jared Rosholt to win the PFL heavyweight title. Isaev (9-0), one of only two undefeated fighters entering Tuesday night, ended the year with his pristine record intact, imposing his will for the majority of the fight. That included a big double leg takedown when Isaev lifted Rosholt (20-8) much higher than heavyweights typically go. In the fourth round, Isaev took Rosholt down again, and when Rosholt couldn’t defend a flurry of punches, the ref stepped in at 4:09 and stopped the bout.

Schulte captured his second PFL lightweight title by unanimous decision in a tight, physical fight against Loik Radzhabov. Schulte (20-3-1), the No. 1 seed, outstruck Radzhabov (13-2-1) by the narrow margin of 120-117, with each fighter getting three takedowns. Schulte held his advantageous positions longer, and that was reflected in the judges’ scorecards of 49-44, 49-46 and 48-47. Boxing legend Mike Tyson wrapped the PFL title belt around Schulte’s waist after the decision was announced.

Palmer went back-to-back earning a lopsided unanimous decision victory over Alex Gilpin in their third fight against one another in 2019. Gilpin was competitive in the first round and even managed to grab a choke from the bottom, but top-seeded Palmer (22-3) regained control and dominated with takedowns in every round. Judges scored the fight 50-43, 50-44 and 50-44. Gilpin (14-4) was a last-minute replacement for Daniel Pineda, whose pending Nevada State Athletic Commission hearing regarding drug test results after a pair of playoff victories kept him out of this final.

No. 1-seeded light heavyweight Sordi was the first $1 million winner of the night in the PFL and capped a dominant season by earning a first-round knockout over UFC veteran Jordan Johnson 2:01 into the first round. After dropping Johnson (12-2-1) with a sharp jab, Sordi stifled a brief single-leg takedown attempt and earned the referee’s stoppage by dropping a series of big punches. For Sordi (22-8), who hails from Argentina, it was his fifth finish in five fights this season in the PFL — four of which came in the first round.

Brandon Loughnane, who will join the official competition in the PFL in 2020, kicked off the night’s action with a dominant unanimous decision victory over David Alex Valente (11-5) in a featherweight showcase fight. Loughnane (19-3), who hails from England, outstruck Valente 81-15 in the fight, and 57-8 in the last two rounds combined.