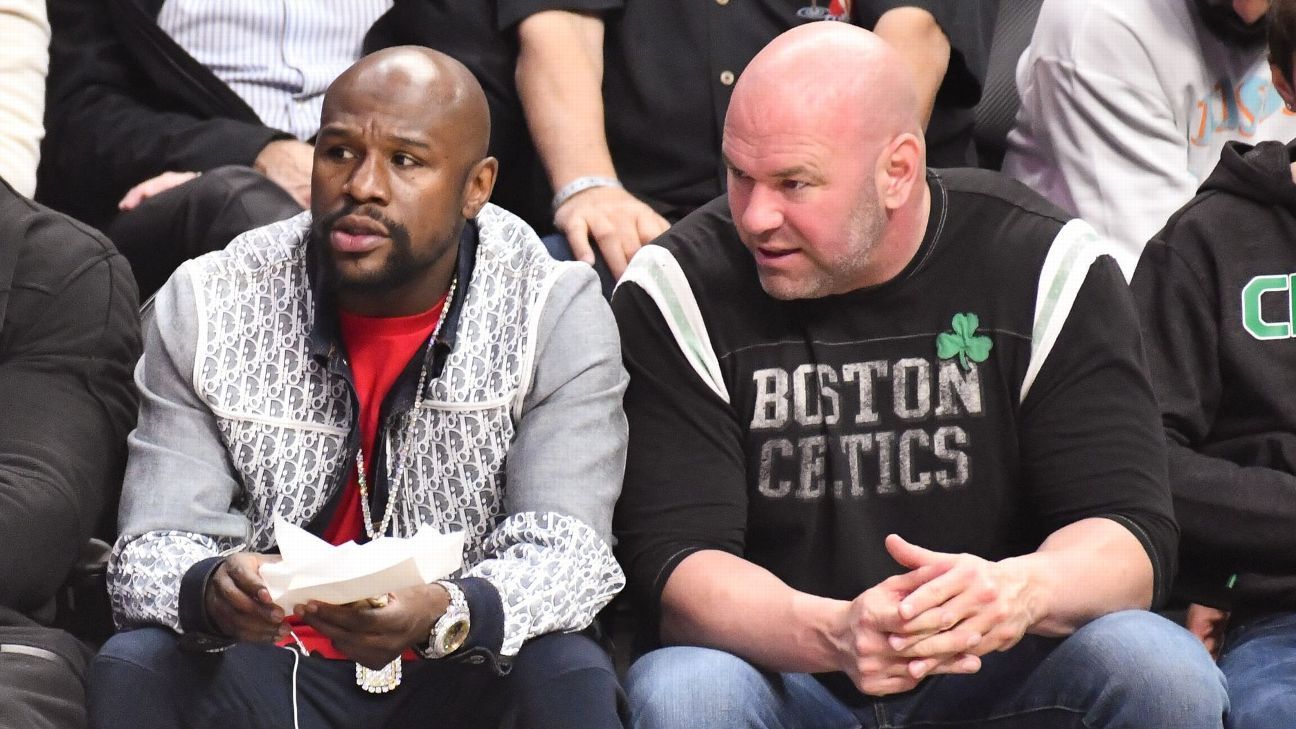 With a big UFC pay-per-view slate already set up to start the first quarter, 2020 is shaping up to be a huge year for MMA. What else do the next 12 months have in store? Here are some bold predictions for the first year of the new decade.

1. Floyd Mayweather will fight in the UFC — sort of

Let’s get this out of the way quickly: Mayweather is never going to fight in the Octagon under mixed martial arts rules against a UFC fighter. Why would he? Mayweather is still the A-side against any combat sports athlete in the world, so he holds all the leverage and can set all the rules. At 42 years old, why would he risk his health in a true MMA fight? It would be preposterous. But that doesn’t mean he won’t be involved with the UFC in one way or another.

In November, Mayweather came to some kind of handshake agreement with UFC president Dana White when they met at an NBA game. Neither has gone into specifics, although White did say the plan is for Mayweather to compete, not just be a partner. The blueprint for something unorthodox is already laid out, from when Mayweather fought young kickboxing phenom Tenshin Nasukawa in a three-round exhibition boxing match for Rizin in 2018. The prediction is something similar will happen with Mayweather and the UFC in 2020.

2. Conor McGregor will compete for a third title

The UFC’s first card of the year features its biggest star squaring off against its all-time leader in wins in the main event. Conor McGregor, who hasn’t fought since October 2018, will close the show at UFC 246 against Donald “Cowboy” Cerrone in a welterweight fight. In the co-main event, former bantamweight champion Holly Holm will face Raquel Pennington.

OK, maybe this prediction isn’t so bold. White has already stated that McGregor will be in line for a rematch against lightweight champion Khabib Nurmagomedov if he beats Donald Cerrone at UFC 246 on Jan. 18 in Las Vegas. The prediction is that 155-pound title shot won’t happen, though. The UFC and McGregor will push for it, but Nurmagomedov just doesn’t seem to be interested — he doesn’t think McGregor is deserving.

If McGregor doesn’t fight for the UFC lightweight belt, there is another titleholder who already said he’s interested in a scrap with McGregor: Jorge Masvidal. That’s right, Masvidal vs. McGregor with the BMF title on the line will headline a UFC card in 2020. You heard it here first.

Despite how some will spin his sporadic MMA career and how much it might annoy fans, Nate Diaz has been a savvy businessman over the past three years. After staying out of the Octagon following his extremely lucrative two-fight series with McGregor in 2016, he finally returned to the sport in August — but only when he thought the time and opponent were right for him. That situation will not present itself in 2020, with McGregor, Masvidal and others busy elsewhere and the UFC unwilling to meet Diaz’s demands. Nick Diaz‘s potential return after a five-year layoff will also be a nonstarter.

However, the prediction is Georges St-Pierre will come out of retirement. There’s no doubt the Canadian legend has more fight left in him; he has not fought since November 2017 but is still training regularly at Tristar Gym in Montreal. There’s one opponent he wants — Nurmagomedov — and the feeling is mutual. GSP will return to fight Nurmagomedov in the headliner of the UFC’s annual Madison Square Garden card in November. It’ll be at a catchweight of 165 pounds.

4. Jon Jones and Israel Adesanya will turn a social media feud into a superfight

There’s too much smoke between these two for there not to be any fire. Of course, each has work to do in his own division before this fight can happen. Adesanya likely will have to beat Yoel Romero to retain the middleweight belt. Jones has to take out Dominick Reyes in the main event of UFC 247 on Feb. 8 in Houston to hang on to the light heavyweight title. Once that is all sorted, though, Jones and Adesanya will turn to each other. It will be a very big moneymaker if the UFC strikes while the iron is hot.

Jones has looked bored with the current crop of 205-pound contenders. Adesanya is the kind of opponent who will get him excited again. Just look at their numerous social media back-and-forths. The beef is real. It’s just a matter of turning it into dollars.

Ngannou just wasn’t ready in 2018 when he fought Stipe Miocic for the belt. He’ll tell you that himself. Ngannou was relatively green, only five years into MMA training. Now, two years older and more seasoned, he is ready to seize his place at the top of the sport. St-Pierre didn’t win in his first shot at a championship, either.

Miocic will defend his title in a trilogy bout against Daniel Cormier at some point, presumably in the first half of 2020. It will be Cormier’s final fight. Then comes Ngannou, who’ll be a shoo-in for an opportunity at the belt if he beats Jairzinho Rozenstruik in the main event of UFC Columbus on March 28. That chance will come this year, and Ngannou, the chiseled, 6-foot-5 mountain of a man, will make good on his world of potential, becoming champ and one of the biggest stars in the UFC.

6. The UFC will add a women’s atomweight division

The next 12 months are set up for strawweight to be one of the most interesting divisions in the UFC. Zhang Weili, the promotion’s first Chinese champion, will defend her title against former champ Joanna Jedrzejczyk at UFC 248 on March 7 in Las Vegas. The winner will have several contenders gunning for the belt, including former titleholder Rose Namajunas and unbeaten Tatiana Suarez.

With the growing popularity of that division and women’s MMA in general, the prediction is the UFC will add another weight class: 105-pound women. The first champion will be crowned at the end of the year at the conclusion of a revamped season of “The Ultimate Fighter.” Several current strawweights, such as Tecia Torres and Carla Esparza, will drop down in weight and be a part of the tournament.

7. Usman vs. Covington 2 will be one of the biggest fights of the year

When the prospect of 2020 rematches comes up, the main ones tossed around are Miocic vs. Cormier 3, McGregor vs. Diaz 3, McGregor vs. Nurmagomedov 2 and Diaz vs. Masvidal 2. While all those would be great and make a ton of money for all parties involved, there’s another out there that people aren’t talking about: Kamaru Usman vs. Colby Covington 2. Welterweight is stacked, and Usman will have plenty of able-bodied contenders coming his way this year. But do not sleep on Covington’s ability to rebound.

By the end of the year, Usman vs. Covington 2 will become a real possibility, and when it happens it’ll be one of the biggest main events of the year. The first fight, which Usman won via fifth-round TKO, was one of the best bouts of 2019. The rematch will not disappoint, either.

8. Nunes vs. Shevchenko 3 will be one of the best fights in women’s MMA

It feels like Nunes, the greatest female MMA fighter to ever live, has already cleaned out the bantamweight division. As for featherweight, there isn’t much to that division, so the prospect of her defending her title there seems relatively pointless. What’s left? How about a third fight between Nunes and Valentina Shevchenko, the UFC women’s flyweight champion? Nunes won their first two meetings, but the most recent one in 2017 ended in a razor-close split decision that truly could have gone either way. Even Nunes has acknowledged Shevchenko as her toughest foe.

Shevchenko still has some work to do fending off contenders at 125 pounds, starting with Katlyn Chookagian at UFC 247 on Feb. 8, but no one in that division has looked nearly as impressive as she has. The completion of a Nunes vs. Shevchenko trilogy seems inevitable, and this champ vs. champ superfight will happen in 2020 with major intrigue.

9. Kevin Lee will be this year’s Jorge Masvidal

Monday through Friday, host Mina Kimes brings you an inside look at the most interesting stories at ESPN, as told by the top reporters and insiders on the planet. Listen

This isn’t an exact comparison, because Lee is already coming off a highlight-reel knockout of Gregor Gillespie at UFC 244 in November. Masvidal strolled into 2019 (his hands behind his back, no doubt) on a two-fight losing streak, only to finish Darren Till, Ben Askren and Nate Diaz in succession to become one of the biggest stars on the UFC roster. The last of those fights was in the UFC 244 headliner at Madison Square Garden in November.

Lee has always had all the tools to be successful — the athleticism, the knockout power, the strength and the wrestling ability. He just hasn’t been able to put it all together. In his prime at age 27, he’ll do it in 2020. And “The Motown Phenom” has the charisma and style to get people’s attention, too. Lee already has fought Tony Ferguson for an interim lightweight title, losing a tough fight while struggling with a staph infection. He’ll move up the lightweight rankings quickly this year, getting big fights and making a name for himself among even casual fans who might not know his history.

10. Promotions other than the UFC will make waves

The PFL already has fired the first salvo, stunningly signing Rory MacDonald for its 2020 welterweight season. With Kayla Harrison‘s continued ascent as a budding star and more acquisitions expected, that promotion could have a big year.

Bellator is in a good spot with Douglas Lima now getting credit for being one of the best welterweights in the world, after beating MacDonald to win the promotion’s 170-pound grand prix and recapture his title belt. And now there’s a featherweight grand prix underway. If blue-chipper A.J. McKee and double champion Patricio Freire meet in the final, it would be big.

The One Championship is surely not done signing free agents. Plus, Eddie Alvarez and Sage Northcutt will return from injuries in 2020, and Demetrious Johnson will fight for the flyweight belt.