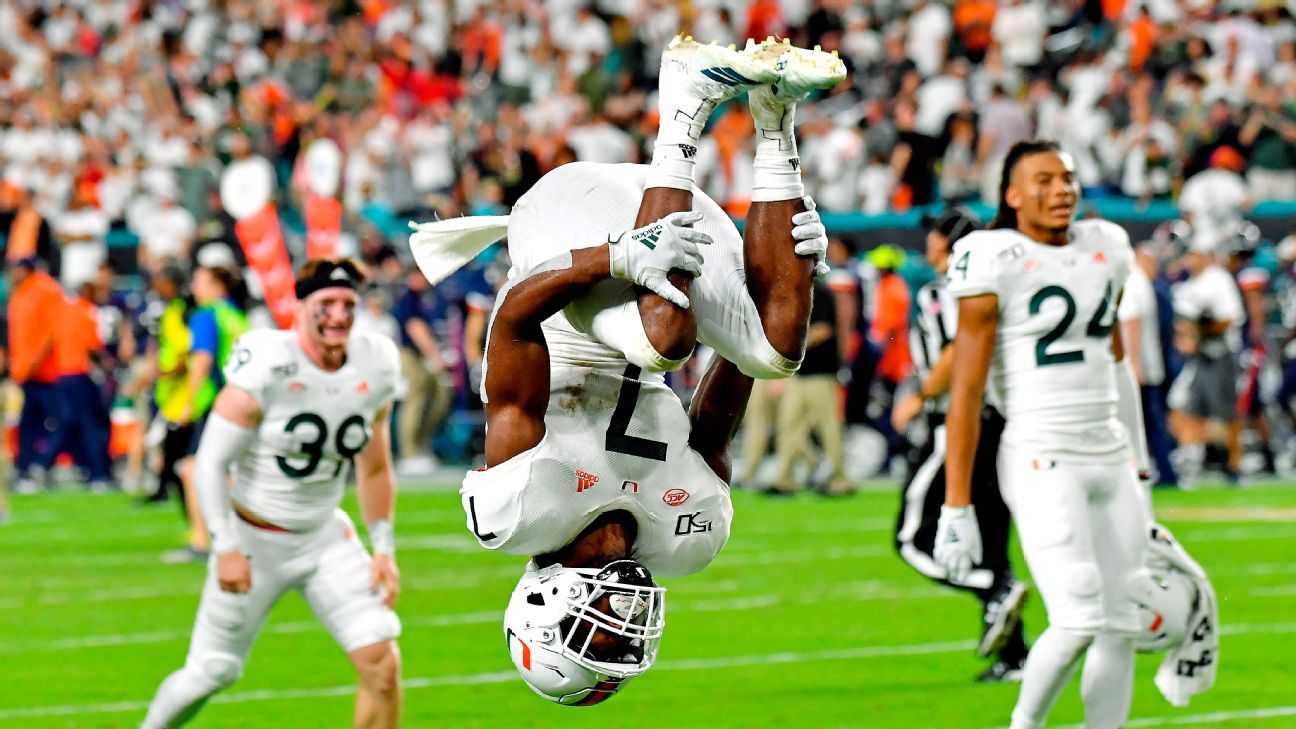 Bowl season is in full swing.

This is your one-stop shop for predictions, spreads, analysis, schedules and storylines. Plus, we’ll keep you posted on the best plays and moments moving forward.

All times Eastern. Tickets can be found here.

Key storylines: How does Louisiana Tech replace superstar Amik Robertson? The shutdown cornerback is skipping today’s action as he preps for the NFL draft. Pro Football Focus gave Robertson its highest overall coverage grade and named him the nation’s best ball-hawking corner. For Miami, can the Hurricanes bounce back after their regular season with a thud, looking uninspired in losses to Florida International and Duke?

Key storylines: Pitt is looking for its first bowl win since 2013 after a disappointing end to the regular season that included losses to Virginia Tech and Boston College. Eastern Michigan, meanwhile, is looking for its second win over a Power 5 opponent this year (it beat Illinois in September).

Hawai’i QB Cole McDonald. Throw for 493 yards and four touchdowns and there’s a good chance you’re earning this honor. It was the most passing yards in a bowl game for a Hawai’i quarterback since Colt Brennan‘s performance in 2006 and a far cry from the 85 yards McDonald threw for in a loss to Louisiana Tech last year. Trailing 34-31 late in the fourth quarter, McDonald hit Nick Mardner for a 24-yard score en route to a 38-34 victory over BYU.

BYU QB Zach Wilson looked like he was going to score a touchdown. And then this happened …

BYU quarterback Zach Wilson attempts to dive into the end zone but is spun around by defenders and fumbles.

The best of bowl season

Hawai’i 38, BYU 34
Hawai’i capped off a wild Hawai’i Bowl thanks to its MVP, quarterback Cole McDonald, who threw for a career-high 493 yards to lead a comeback win over BYU. That is the most in a bowl game by a Hawai’i quarterback since Colt Brennan threw for 559 yards against Arizona State in the 2006 Hawai’i Bowl. It was a bit of redemption for McDonald, who threw for only 85 yards in last year’s Hawai’i Bowl loss to Louisiana Tech. After a first half in which the teams combined for 55 points, Hawai’i went scoreless in the second half until 1:17 remained in the fourth quarter. That is when McDonald fired the game-winning 24-yard touchdown pass to Nick Mardner. Hawai’i won its 10th game for the first time since 2010. — Andrea Adelson

UCF 48, Marshall 25
For the first time in three years, UCF was not in a New Year’s Six game. But if anybody questioned whether this team would be motivated, they got their answer from the start on a sloppy, chippy day. Despite playing without four starters who opted to sit out, the Knights dominated from start to finish. Marshall contributed, with four turnovers before halftime, including a pick-six and a scoop-and-score. UCF has won 10 or more games in three straight seasons, and its 40 wins since 2016 mark the winningest stretch in school history. Marshall had the longest bowl win streak in the nation entering the Gasparilla Bowl (seven), but the Thundering Herd made far too many mistakes to give themselves a chance to win. — Andrea Adelson

North Carolina A&T 64, Alcorn State 44
Despite a sluggish start, North Carolina A&T and Alcorn State combined for 108 points and 1,034 yards in a wild game. Wild or not, though, the result was the same as ever: an A&T win. Kylil Carter threw for 364 yards and six scores, and the Aggies were up double digits the entire second half. A&T has won four HBCU national championships the past five seasons. This is an all-out dynasty now. — Bill Connelly

Liberty 23, Georgia Southern 16
Coach Hugh Freeze helped get Liberty to its first bowl game in program history, and the Flames have their first bowl win in program history after beating Georgia Southern. Georgia Southern had trouble getting anything started on offense early in the game, and the Eagles had only 28 passing yards with six minutes left in the third quarter. Despite a late run by Georgia Southern to pull within seven points, Liberty was able to come out on top. Liberty quarterback Stephen Calvert had 270 yards passing with two touchdowns and two interceptions, and Frankie Hickson had 120 rushing yards on 22 carries to lead the Flames. — Tom VanHaaren

Florida Atlantic 52, SMU 28
Despite missing several players and having an interim coach (Glenn Spencer), FAU turned in a heckuva performance to knock off a 10-win team from the American Athletic Conference. The Owls’ defense was huge, coming away with two takeaways that translated to 14 points and holding SMU to just two touchdowns until the fourth quarter, at which point the game was well in hand. FAU quarterback Chris Robison was outstanding, slicing up the SMU defense while throwing for 305 yards and two touchdowns. — Sam Khan Jr.

FAU’s defense has put the Boca Raton Bowl on 🔒 pic.twitter.com/DiNQZzbJkH

Arkansas State 34, Florida International 26
Arkansas State receiver Omar Bayless — who came into Saturday trailing only Biletnikoff Award winner Ja’Marr Chase in receiving yards nationally — was stellar, catching nine passes for 180 yards and a touchdown in the Red Wolves’ win over FIU. During a key scoring drive late in the fourth quarter, he hauled in a 65-yard catch-and-run that was partially negated by a penalty, then came back on the next play with a 52-yard reception to set up Arkansas State’s final score of the night. Quarterback Layne Hatcher (393 passing yards, four touchdowns) was excellent as well. — Sam Khan Jr.

Washington 38, Boise State 7
It wasn’t literally a passing of the torch as Washington Huskies coach Chris Petersen called his successor, Jimmy Lake, on stage for the presentation of the Mitsubishi Las Vegas Bowl trophy, but it was awfully close. Before Petersen could hoist the trophy, he gave Lake a chance to take the microphone and join him in celebrating the win. The moment was symbolic, as Saturday marked Petersen’s last game as Washington’s head coach before he is replaced by Lake, the team’s defensive coordinator. Fittingly, Lake’s defense delivered a dominant performance in the Huskies’ 38-7 win over Boise State, forcing three turnovers and holding Boise State, which entered the game 12-1, to 266 yards of offense. Yet try as he might, Petersen couldn’t avoid center stage on a night when fans of both teams wanted to celebrate his career split between the two universities that produced wins nearly 80% of the time. After moving to 4-0 in the Las Vegas Bowl, Petersen jokingly suggested that with free time now on his hands, he might try his chances at a different kind of Vegas competition: “I need to take some of that luck to the tables tonight and see how I do,” he said before quickly adding, “probably not.” — Kevin Pelton

Appalachian State 31, UAB 17
The win cements a special place in history for Appalachian State. After coming into the game ranked No. 20 in the AP poll, the Mountaineers are virtual locks to become the first team in Sun Belt history to finish a season ranked in the AP Top 25. Assuming they move up at least one spot, they’ll also break the record they currently hold for highest ranking among Sun Belt teams. On top of that, the win moves Appalachian State to 5-0 all time in bowl games and gives the program its first 13-win season since it moved to the FBS level in 2014. — Kyle Bonagura

Buffalo 31, Charlotte 9
Charlotte’s first bowl trip didn’t end well, but the game marked a turning point for the program. First-year coach Will Healy has created some buzz at a program that had virtually none before this season, and the bowl showcase is another opportunity to build. For Buffalo, Friday’s victory offered a strong ending to a rocky season in which the Bulls added impressive wins against Temple and Central Michigan as well as head-scratching losses to Liberty and Kent State. The Bulls’ tandem of 1,000-yard backs — Jaret Patterson and Kevin Marks — is set to return for 2020, however, and after a strong day in the Bahamas (Patterson had 173 yards and two touchdowns), it could be the Group of 5’s best backfield next season. — David M. Hale

We have an extra passenger heading home. #UBhornsUP pic.twitter.com/za4JpWpEok

Kent State 51, Utah State 41
Kent State’s 100-year wait for a postseason win is over. Let that sink in. The program played its first game in 1920, and before Friday’s exciting victory against Utah State — and NFL draft-bound QB Jordan Love — the Golden Flashes had never won a postseason game. That’s no lower-level playoff wins, no conference title wins and no bowl wins in three previous appearances. It caps a remarkable turnaround for the Golden Flashes, who won just two games in each of the previous two seasons and started this season 3-6 before winning their final four games to finish 7-6 under second-year coach Sean Lewis. — Kyle Bonagura

Pat McAfee got in on SMU’s turnover celebration at the Cheribundi Boca Raton Bowl.

Found myself in the middle of club Takeaway 😂 #BocaBowl pic.twitter.com/OlFXcccgrJ

The most wonderful time of the year

Why would I smile and do “Horns Up”? A University of Texas graduate helping me change a blowout on I-40 in 5 pm trafffic! His name Francisco De Soto, 37-year-old mechanical engineer, from El Paso, Texas. Francisco had no idea who he was helping! @UTAustin #mechanicalengineering pic.twitter.com/iwRMFXDmV8

Cotton: Can Memphis make a statement against Penn State?