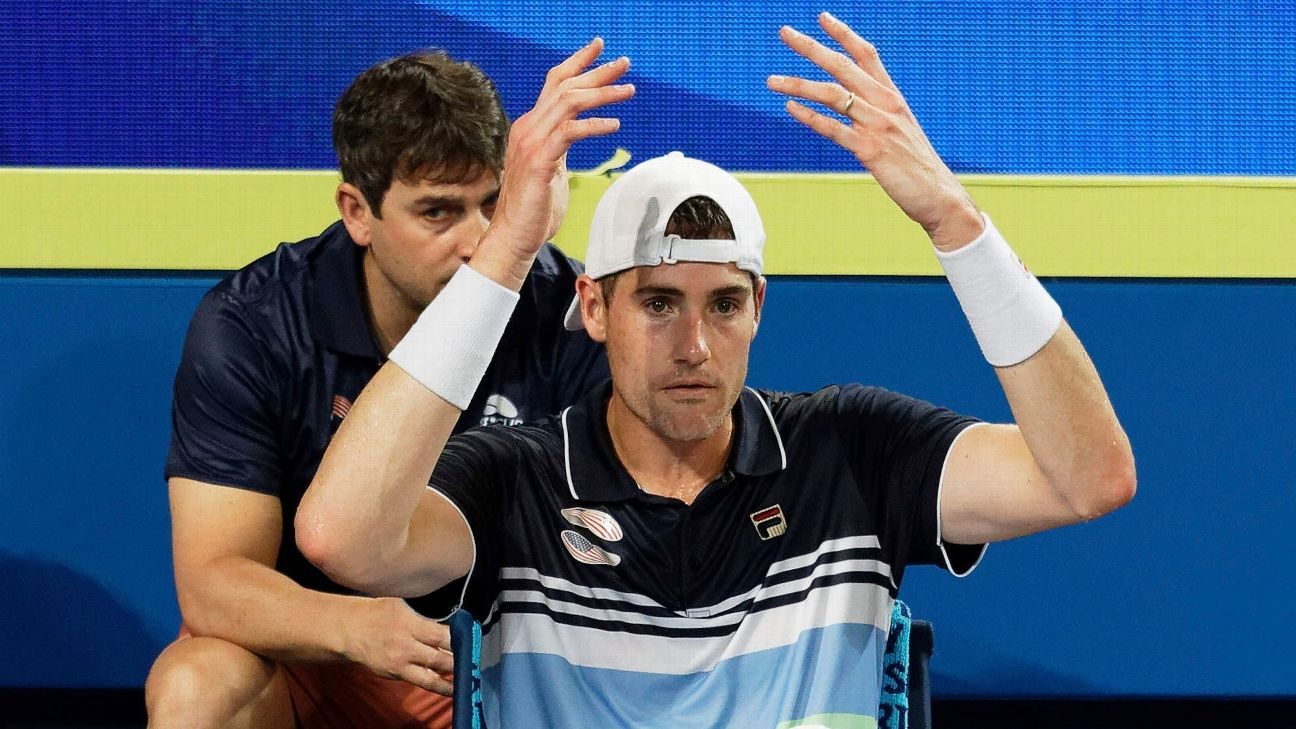 BRISBANE, Australia — Daniil Medvedev beat John Isner 6-3, 6-1 to give Russia two wins from two starts at the ATP Cup, leaving the U.S. as the only winless team so far in Group D.

Russia followed its 3-0 opening win over Italy with another comfortable victory in Perth on Sunday, clinching the match against the Americans before the U.S. pairing of Austin Krajicek and Rajeev Ram salvaged some pride with a 6-3, 6-4 win over Karen Khachanov and Medvedev. Khachanov gave the Russians a winning start with his 3-6, 7-5, 6-1 comeback victory over Taylor Fritz in the first singles.

No. 5-ranked Medvedev was called for a foot-fault on match point, which he unsuccessfully challenged, but then closed out immediately when Isner netted the next service return.

“I thought he definitely did what he does well, which is make a lot of balls, and so I wasn’t even close tonight,” Isner said. “I didn’t quite serve as well as I needed to, there’s no doubt.”

The Australians moved atop Group F with a 3-0 sweep of Canada in Brisbane, and Germany’s dramatic win over Greece, decided by a super tiebreaker in the doubles, meant the tournament hosts were assured of advancing to the quarterfinals.

German pair Kevin Krawietz and Andreas Mies rallied for a 3-6, 6-3, 17-15 win in the doubles over Michail Pervolarakis and Stefanos Tsitsipas, who had earlier trounced Alexander Zverev 6-1, 6-4 in the second singles encounter to get Greece level at 1-1.

Bulgaria beat Moldova to make it two wins from two in Group C in Sydney, before Britain edged Belgium 2-1 with a victory in the doubles.

Britain, beaten in the opening match by Bulgaria, secured the bounce-back win with Jamie Murray and Joe Salisbury coming out on top in the deciding doubles match. Dan Evans leveled it earlier with a 6-4, 6-4 win over David Goffin after Belgian No. 2 Steve Darcis beat Cameron Norrie 6-2, 6-4.

Italy needed victory in the doubles to edge Norway in their best-of-three match encounter earlier Sunday in Perth, and now both teams have 1-1 records in Group D. Simone Bolelli and Fabio Fognini combined to beat Casper Ruud and Viktor Durasovic 6-3, 7-6 (3).

Ruud, who led Norway’s opening win over the United States, had beaten Fognini 6-2, 6-2 in the second singles match to level the tie after Stefano Travaglia‘s 6-1, 6-1 win over Durasovic gave the Italians an early lead.

The six group winners and the two best second-place teams advance to the playoffs in Sydney.

Having the home team there could be a boost for sports lovers in a country experiencing its worst wildfire season in recorded history, which has already left 24 dead, 2,000 homes destroyed and burned through large swathes of Australia.

Two days after launching his cash for aces plan to raise funds for the national wildfire recovery effort, Nick Kyrgios pulled out of his scheduled match against Felix Auger-Aliassime because of a sore back. No. 48-ranked John Millman stepped in to win 6-4, 6-2 on his home court.

Kyrgios pledged to donate 200 Australian dollars ($140) for every ace he serves this month. He hit 20 in his opening win and promising more.

Alex De Minaur secured the match for Australia when he rallied from a set and a break down to beat Denis Shapovalov 6-7 (6), 6-4, 6-2 at Pat Rafter Arena.

“I would love to take care of things a bit easier, but you kind of got to play the cards you’re dealt,” said De Minaur, who did a little dance on court to celebrate his win. “I went through a little bit of a rough patch … but I managed to turn things around. So obviously very proud.”

Australia also won the doubles to complete a sweep, avenging a quarterfinal loss to Canada at the Davis Cup last November.

Dimitrov, the playing captain for Bulgaria, said the winning start was no surprise to him.

“Coming into this thing, I knew that if we come together, we have a great opportunity,” he said. “I know I have to not only believe in myself now but I need to believe in the players that are with me.”

Haze and smoke from the wildfires that have devastated parts of Australia were more obvious around the courts in Sydney’s western suburbs than in previous days, but Dimitrov said the players were still able to focus on their matches.