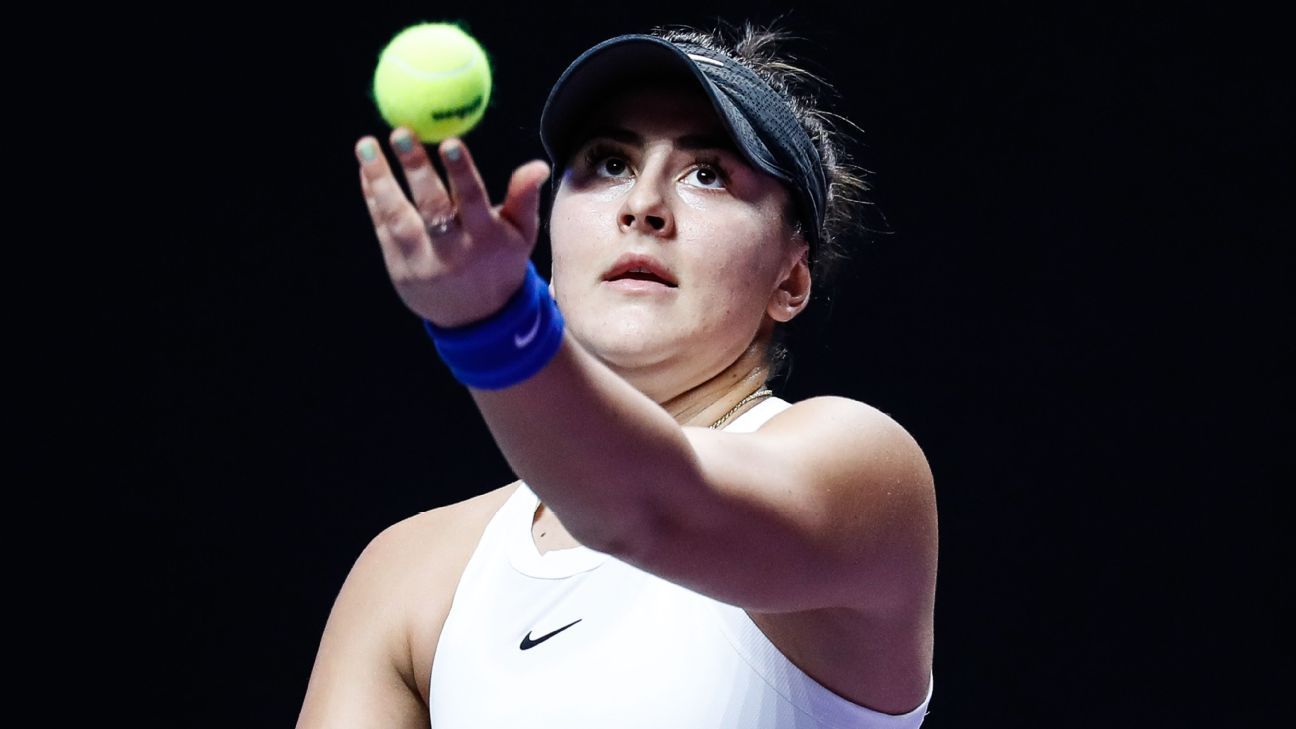 The WTA season begins in earnest Monday, with 14 women 21-and-under ranked in the Top 100. They are such fresh faces and so good that even the most expert commentators have trouble keeping up with their development and progress.

We’ve whittled the group down to an elite eight — some of whom will be familiar, others not so much — and, with the help of some experts, handicapped them as the Australian Open looms on the horizon:

At the moment, neither of these gifted young stars can be rated higher because their futures are on hold. Anisimova, 18, suffered an unexpected blow in mid-August. Konstantin Anisimov, Amanda’s father and the guiding light in her career, died unexpectedly. He was in his 50s.

Anisimova, the youngest player in the WTA at the time and already ranked No. 24 (also her present ranking), pulled out of the US Open and has played just three matches since — winning just one of them. What she probably needs more than anything else at this stage is continued space to heal at her own pace.

At the time her life was so painfully disrupted, Anisimova already possessed a game that ESPN analyst Pam Shriver described as, “classic, the kind of game that I could watch the longest, with the beauty of some old-school strokes.” But Anisimova’s size and power are more of the moment than sepia-toned, and that’s one reason why Tennis Channel analyst Paul Annacone puts her two-handed backhand right up there with Coco Gauffs as destined to evolve into one of the “top weapons” in the WTA game.

Vondrousova, who is 20, led the entire tour in 2019 in percentage of return points and games won. She delighted fans at Roland Garros with her crafty play and liberal use of the drop shot, but wrist surgery shortly after Wimbledon sidelined her for the rest of 2019 and her immediate plans are unclear. She hit a career high of No. 14 in July and remains at No. 16.

A 6-footer with plenty of athletic ability and crisp, flat shots, the Russian native who now plays for Kazakhstan burst onto the WTA scene in a big way at the Bucharest Open in July, blasting her way to the championship shortly after turning 20.

That win virtually cut her ranking in half, to No. 65. She has done an excellent job keeping it there. She was forced to qualify for the US Open (her Bucharest result occurred after the US Open direct acceptance deadline had passed), and while she lost in the first round in New York, she made a final, two quarters and a semi in her subsequent 2019 events, working her way up to her present No. 36. Her win-loss record is a bit deceptive, as it includes many qualifying and sub-main tour events.

Yastremska is another gifted player with a name that many find difficult to pronounce or remember from a part of the world that has been churning quality pros out at an amazing rate. That has made it easier for the 19-year-old Ukrainian, currently ranked No. 22, to fly under the radar. Shriver believes she’s the most underrated among her peers.

“She’s a little bit unknown but coming on quickly,” Shriver said. “I love her power and her tough mindset, she’s like a dog that won’t let go of a bone. But she also has great skills, built on a lot of power.”

Gilbert and Annacone share her opinion. Annacone told ESPN.com: “She’s very dangerous. Someone who just piles up wins without a lot of commotion.” Gilbert placed her right behind Gauff in our informal poll of youngsters with the most long-term upside.

Yastremska put the finishing touches on the game she developed in her native Odessa at the eponymous tennis academy of her idol, Justine Henin. But where Henin had a creative, artistic bent, Yastremska is all about bold, aggressive play.

Yastremska has won all three WTA finals she’s played and recovered from an early season hiccup (she absorbed three consecutive first-round losses starting in Istanbul) with a win in Strasbourg. She teamed up for 2020 with elite coach Sascha Bajin who has guided, among others, Serena Williams and Naomi Osaka.

Yes, at 21 she’s one of the oldest women in this coterie. And sure, she’s just 5-foot-7. But she clearly has navigated some of the potential pitfalls of youth. As for her slight stature, it’s offset by a mental toughness that Gilbert rates as second only to that of Bianca Andreescu. Annacone rates her mental attributes as, simply, “terrific.”

Unlike some of the other high-value fledglings, there are no notable areas of age or injury-related areas of concern. Her greatest weakness is that she doesn’t generate knockout power.

Kenin won three titles in four finals in 2019, but perhaps her best accomplishment was achieving those back-to-back semis in the resonant WTA premier events in Toronto and Cincinnati. At the former, she defeated, in succession, No. 1 Ash Barty, rising star Yastremska and No. 6-ranked Elina Svitolina. The launching pad for it all? Her third-round French Open upset of Serena Williams. Kenin has the mentality of a big-match player.

“When it comes to getting the most out of her game she’s as good as anybody,” Shriver said. “Her backhand was always great, and once the forehand improved that closed the gap. From there, mental toughness became the key.”

Martin Blackman, manager of the USTA Player Development program, told ESPN.com, “Kenin has slipped into that top-10 role [her actual ranking is No. 14] and she’s really comfortable with it now. She’s not the kind who’s going to stop and try to protect what she has. She’s going to reach for more.”

Last year at this time, Sabalenka was all the rage, a 21-year-old who emerged overnight as the pick of many pundits to win the Australian Open. She wasn’t always the “dark horse” pick, either. But Sabalenka had trouble handling all the attention and lost in the third round to then 17-year-old Anisimova. Sabalenka then ran hold and cold for the rest of the year.

So here we are again, with Sabalenka 10-2 in her past 12 matches poised just outside the top 10 at No. 11 with an additional year of experience under her belt. Presumably she’s also stronger. Gilbert rates Sabalenka’s serve as one of the great weapons on the WTA Tour, but he also sees it as one of her outstanding liabilities because it misfires so often. Shriver agrees, adding that Sabalenka’s second serve is probably the tour’s best — when she can stick it. Which isn’t often enough.

“Her weakness, all around, is consistency,” Shriver said. “Now that she’s been around long enough to recognize that the key question becomes can she find it, week-in, week-out? Some very talented players never could.”

Given what Sabalenka has promised and delivered — or failed thus far to deliver — this could be a career-shaping year for her.

Linz? Linz? After that showstopping, global breakout at Wimbledon?

The thing about Linz is that Gauff was coming off a bubble-bursting 6-3, 6-0 loss to Naomi Osaka at the US Open, a drubbing that ended her summer Slam season in tears. Linz, more than a full month later, was her next tournament. Ranked No. 110, she still had to qualify. She passed that test, then defeated five seasoned veterans (including No. 8 Kiki Bertens) to claim her first WTA title. It was a great show of maturity, determination and confidence.

Gauff’s talent is obvious; our experts all rate her at or almost at the very top in areas like athleticism, versatility, upside and oh, that sweet two-handed backhand. As Annacone said, “The foundation is so solid, in all the areas — the heart, the head, the physical talent. She’s the complete package.”

What’s most striking, though, is the high marks she gets in intangibles that fall well outside the immediate demands of the game. With so many talented players availing themselves of so much excellent coaching, career management has taken on increasing importance. Despite Gauff’s youth and freshman status, her situation is extremely stable. Blackman said, “Coco’s father (Corey Gauff) has a long-term development perspective. She has a great management company in Team 8 (the boutique firm led by Roger Federer) and a good team of coaches.”

Shriver expanded on the point. “You really have to have people around to tell you, and believe, that you are going to be a champ. Coco is someone who for years has envisioned winning big ones. That has a great upside because once you’re in a position to win a big one it’s not such a big deal. You don’t think, ‘Oh my God, I never thought I’d be in a Wimbledon final!’ “

But keep the caveat in mind. Gauff is 15. Nobody really knows what the future holds.

The 19-year-old responsible for the feminist twist that transformed the Toronto Raptors’ NBA slogan into “She the North” compiled a 2019 record that none of her 21-and-under peers could match. It’s not even close. Yet perhaps the most astonishing element in her saga is also the most ominous one — the physical frailty that has haunted her even as it makes her achievements that much more striking.

“Nobody could have predicted what she did,” Shriver said. “Nobody.”

Andreescu played just two matches between late March and the beginning of August (an aborted, premature comeback attempt from her shoulder injury at the French Open), yet she still managed to finish 2019 ranked No. 5, thanks largely to winning mega-events at Indian Wells and Toronto in addition to the US Open.

Unfortunately, her 2019 season also ended on a jarring note, a knee injury that forced her to pull out of the WTA Finals and, recently, her planned 2020 debut in Auckland — the tournament where, ranked just No. 152, she qualified and made the final last year, lighting the fuse on her spectacular rise.

“If you could draft-pick shots, the Andreescu forehand might be my No. 1 pick,” Shriver said. “It’s heavy, it has power and spin. She can play the change-up and slice and she’s comfortable with the drop shot.”

Gilbert calls the Andreescu forehand the “biggest weapon after the Serena Williams serve.”

Andreescu also gets universal high marks for mental toughness and athleticism, rating higher in more categories than her peers. Unfortunately, that includes her “notable weakness or handicap,” her physical vulnerability.

Still, her mental fitness for the demands of the game is striking, her athleticism well-disguised in that 5-foot-7 frame, and her fighting spirit as joyful as it is fierce. That’s why, for the 21-and-under group, she sets the bar.