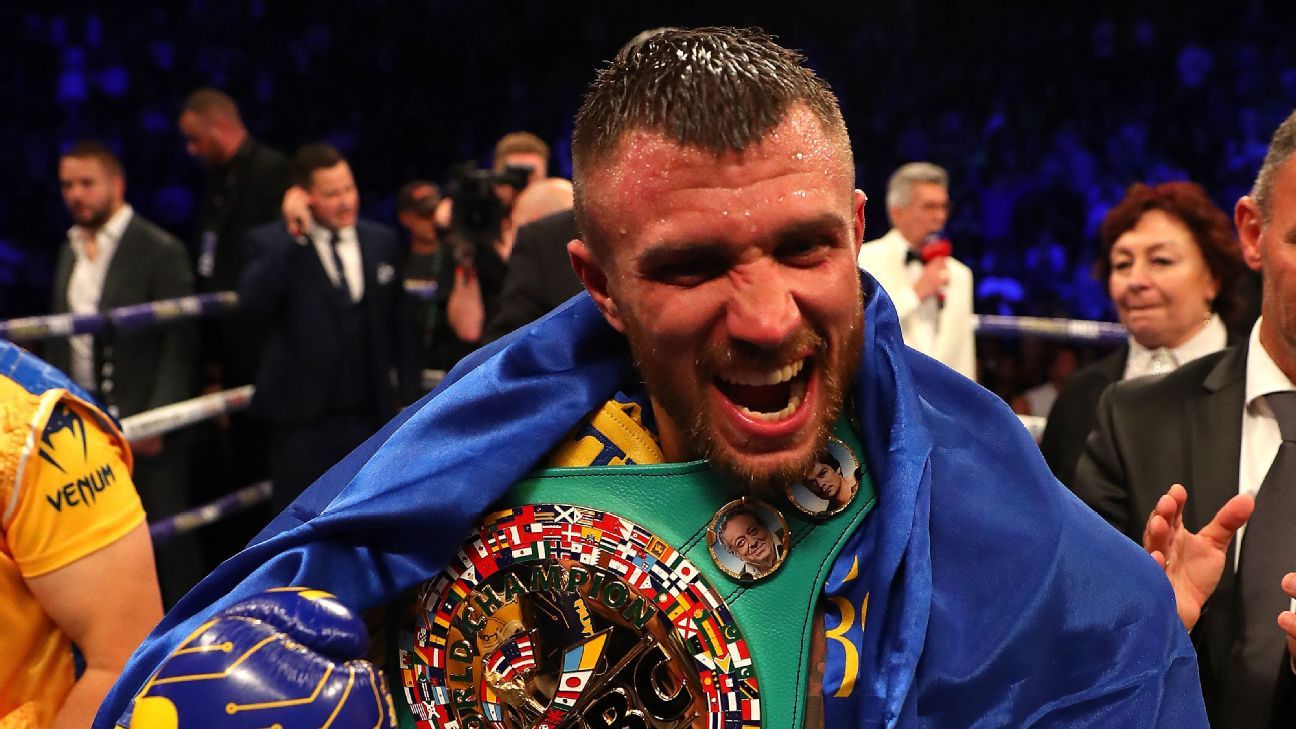 There are thousands of professional boxers in the world. Some are internationally known and heralded while others are just getting their first professional bouts under their belts. The very best stand out among the weight classes and hold their titles high, and the elite of the elite are given pound-for-pound status.

Who are the best fighters at every age? ESPN’s Dan Rafael and Steve Kim have compiled a list of boxers who stand out from the masses.

To see the best fighters from 20 to 30 click here.

Simply put, Lomachenko is one of the most stylish boxers the sport has seen in a long time. After losing his second pro bout to veteran Orlando Salido in March 2014, Lomachenko defeated Gary Russell Jr. three months later to win the vacant WBO featherweight title.

The two-time Olympic gold medalist from Ukraine has more than lived up to the lofty expectations that were placed upon him, winning world titles at featherweight, junior lightweight and now lightweight, where he currently holds the WBA and WBO belts. Lomachencko is also the WBC “franchise champion.”

Many boxers nowadays can claim titles in different weight classes, but how many can honestly state that they were the best fighter in each respective division along the way? Lomachenko certainly can. Nobody has accomplished what Lomachenko has done in so few fights.

The current WBO welterweight titleholder is one of the elite boxers in the world after winning titles at lightweight, fully unifying the junior welterweight class and now at 147 pounds.

The pride of Omaha, Nebraska, is one of the most versatile and adaptable boxers on the planet. There is no better switch-hitter in the game; he is as effective from the southpaw stance as he is right-handed. And he has a legitimate mean streak that pushes him to finish fights with great aplomb.

The only problem — and probably the biggest one — he seems to have is getting other elite fighters to face him.

Ugas hit some rough waters back in 2014, dropping consecutive fights against Emanuel Robles and Amir Imam. But to Ugas’ credit, he refocused himself, and prior to his loss in March to WBC welterweight titlist Shawn Porter, Ugas had won eight fights in a row, defeating fighters such as Bryant Perrella, Ray Robinson and Thomas Dulorme to make himself a legitimate contender.

The tall, smooth-boxing Ugas gave Porter problems and he should’ve gotten his hand raised in victory. Instead he lost a contentious split decision.

Ugas has since rebounded with a dominant decision win over previously undefeated Omar Figueroa. Rated in the top five by both the WBA and WBC, Ugas will soon have another title shot on the horizon.

Joe Tessitore, Andre Ward, Timothy Bradley and Mark Kriegel discuss what has happened since Deontay Wilder vs. Tyson Fury 1 and who has the upper hand for the rematch

Wilder is the hardest-hitting fighter in the sport today. Yes, there are many heavy-handed boxers out there, but none possesses the game-changing eraser that the “Bronze Bomber” has. And that was exhibited once again on Nov. 23 as he zapped Luis Ortiz with a single right hand in the seventh round.

In 42 victories, Wilder has scored 41 knockouts, and every single fighter who has stepped into the ring with him has either been stopped or hit the canvas.

Wilder, the WBC heavyweight titleholder, will face lineal champion Tyson Fury in February in a rematch of their controversial split draw of December 2018.

Alvarez is a solid, if not spectacular, light heavyweight who for a short spell was the WBO light heavyweight titleholder after he knocked out Sergey Kovalev in 2018. But then in their rematch in February, Alvarez put forth a desultory effort in handing back the title to Kovalev.

The best thing about Alvarez is his sturdiness and durability. Despite the loss to Kovalev, he is still considered a top-10 light heavyweight.

Alvarez faces the dangerous and explosive Michael Seals on Jan. 18 to kick off his 2020 campaign.

Kovalev is no longer the feared “Krusher” that he was from 2013 to 2016, where he was considered the world’s best light heavyweight. He has power in both hands and a very precise and probing jab.

But Kovalev has had a notable career. After demolishing Nathan Cleverly in 2013 to win his first belt, Kovalev went on a streak of victories that included Bernard Hopkins, Jean Pascal (twice) and Eleider Alvarez. And he came just short against Andre Ward in their first matchup.

For several years Kovalev was on most pound-for-pound lists, and he will get Hall of Fame consideration after he retires.

For many years, Golovkin was considered the most formidable middleweight in the world, but at age 37, he is no longer the irresistible force he once was. He went 12 rounds back in October with the solid Sergiy Derevyanchenko in a fight many observers believe he lost.

He still has power in both hands and he’s physically strong, but you can see the physical erosion with GGG. While still a tough out, you wonder if his days as a truly elite boxer are now in the rearview mirror.

Pulev is currently the IBF mandatory challenger for newly re-crowned heavyweight titleholder Anthony Joshua. In 2019, Pulev defeated the likes of Bogdan Dinu (TKO7) and Rydell Booker (W10) as he waited his turn.

Pulev is strong and rugged. Since getting stopped by heavyweight champion Wladimir Klitschko in 2014, Pulev has won eight consecutive fights.

Other notable boxers who are 38: Ray Beltran, Krzysztof Wlodarczyk.

After his ignominious defeat at the hands of Lomachenko at the end of 2017, Rigondeaux bounced back in 2019 with victories over Giovanni Delgado (KO1) and Julio Ceja (TKO8). The Cuban southpaw is a top fighter at junior featherweight.

The Ceja fight was by far the most entertaining of his career.

Other notable boxers who are 39: Carlos Takam, Mariusz Wach.

Not much needs to be said about “Pacman,” who in his most recent fight showed that he is still at the upper echelon of the game at age 41 by defeating the previously unbeaten Keith Thurman in July by split decision. No, he is no longer the whirlwind he once was, but this version of Pacquiao is still more than a handful for most.

Long ago, Pacquiao became a boxing legend. His most recent victories, in which he has mastered the likes of Adrien Broner and Thurman, 10 and nine years his junior, respectively, have only added to his legacy.

His days as an active fighter are limited, and more than ever, his contributions to the sport should be appreciated.

Other notable boxers who are 40-plus: Luis Ortiz, Alexander Povetkin.