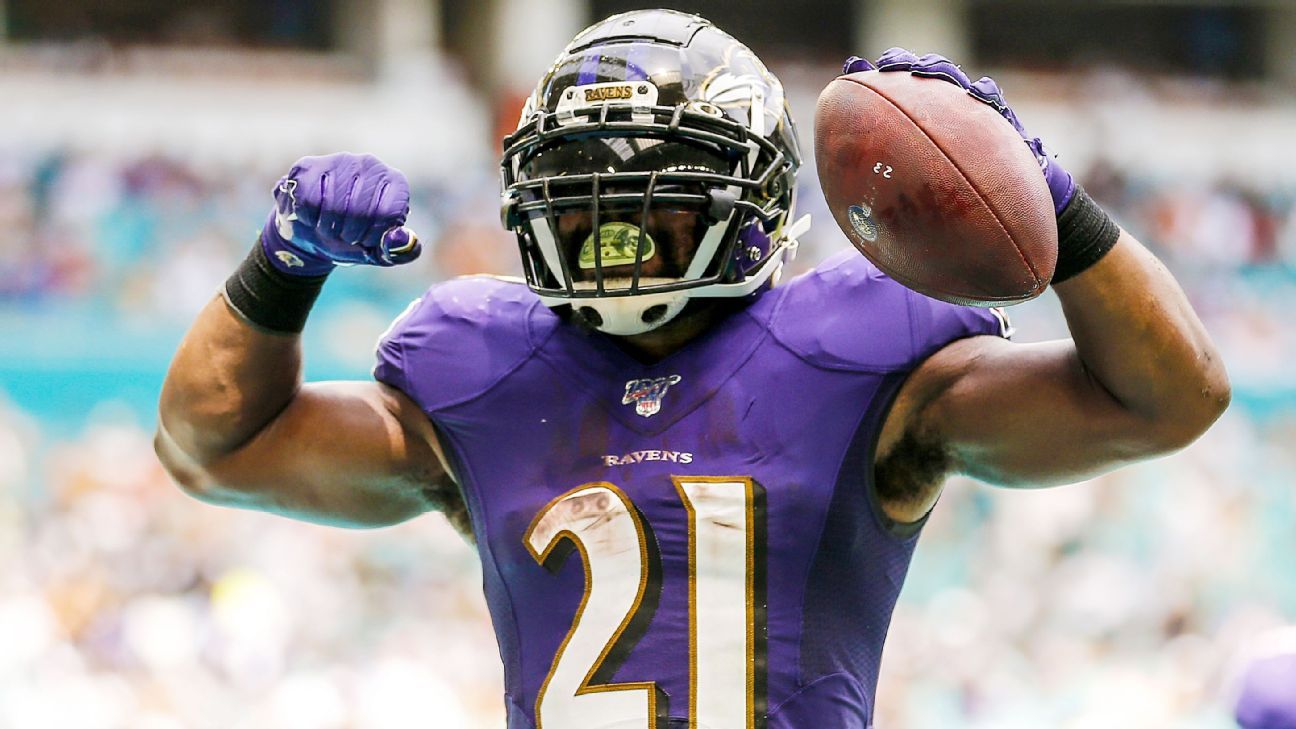 A thrilling wild-card weekend has yielded another quartet of intriguing matchups in the divisional round of the 2019 NFL playoffs. Injuries are sure to play a major part in determining which teams win and which head home to improve for next season.

Our NFL Nation reporters have searched for the latest intel on all the key injuries. Read on to get the latest scoop from inside NFL locker rooms on who’s in and who’s out this weekend.

The Vikings’ top two receivers are on the injury report ahead of the team’s trip to the divisional playoffs.

Adam Thielen sustained an ankle injury in practice Wednesday and was listed as limited, while Stefon Diggs missed his second straight day with the flu. Coach Mike Zimmer said Diggs will “be fine” and did not seem too concerned about his availability for Saturday. The exact severity of Thielen’s injury remains unknown, but the early indication, according to league sources, is that it won’t be severe enough to force him to miss Saturday’s game. Cornerback Mackensie Alexander will undergo surgery soon to repair a tear to his lateral meniscus, per a source, and won’t play in San Francisco. — Courtney Cronin

The 49ers are as healthy as they’ve been in a couple of months with three key defenders — linebacker Kwon Alexander, defensive end Dee Ford and safety Jaquiski Tartt — expected to return Saturday against the Vikings. Tartt has been full go in practice, while Ford and Alexander have been limited. But coach Kyle Shanahan said this week there’s a “good chance” Alexander will be activated from injured reserve, and is optimistic that Ford will also be available. If all three are ready, the Niners will have every projected opening day defensive starter ready, except defensive tackle D.J. Jones. Right guard Mike Person (neck) also looks poised to return. — Nick Wagoner

Left tackle Duane Brown wasn’t scheduled to practice Wednesday, but Pete Carroll said he got some work in for a second straight day and called that an “encouraging sign.”

To celebrate 100 years of pro football, Peyton Manning travels the country to see the people and places that made the NFL the NFL.
Watch on ESPN+ » More »

George Fant has replaced Brown at left tackle for two of the three games Brown has missed because of a knee injury that required minor surgery. That’s kept the Seahawks from using Fant in his usual role as an extra tackle in heavy packages, which has become a staple of their offense. Carroll said the Seahawks won’t know about Brown’s status until later in the week. Coming back in under three weeks from even a minor surgery is no cakewalk for a 34-year-old offensive lineman, so don’t be surprised if Brown doesn’t play against Green Bay. — Brady Henderson

With right tackle Bryan Bulaga out of the concussion protocol, the only major concern appears to be with nose tackle Kenny Clark. He popped up on Wednesday’s injury report because of a back issue. Clark practiced last week during the two days of workouts during the playoff bye week, but he was seen riding the exercise bike during the early part of Wednesday’s practice. Clark is not only key to the Packers’ run defense, but a late-season surge pushed him up to third on the team in sacks with 6.0. — Rob Demovsky

Inside linebacker Jayon Brown injured his shoulder on the first series against the Patriots last week.

He returned, but was knocked out for the rest of the game and went into the locker room after the first quarter. Brown told ESPN that his shoulder was “good” as he was leaving the locker room. He was on the field for a light practice on Tuesday, but was not seen during the open portion of practice on Wednesday. The Titans will need Brown’s speed going up against Lamar Jackson and the Ravens. — Turron Davenport

Ravens running back Mark Ingram II hasn’t practiced since suffering a calf strain on Dec. 22, and he’s considered day-to-day. Players in the Ravens’ locker room believe Ingram will play Saturday because he’s so tough and durable. But calf injuries can be tricky, and could be an issue for Ingram throughout the playoffs. Baltimore has a lot of confidence in backup Gus Edwards, who ran for a career-high 130 yards in the season finale filling in for Ingram. — Jamison Hensley

Will wide receiver Will Fuller V play on Sunday against the Chiefs? “I don’t know yet,” Bill O’Brien said on Wednesday.

Defensive end J.J. Watt played around 50 snaps in his return from a torn pectoral muscle (mostly in the fourth quarter and overtime), but said he’s not sure what the plan will be on Sunday against the Chiefs. “Just because I played in one game doesn’t mean my pec magically healed,” Watt said. He said he played more than he expected against Buffalo and he’s “still in the same situation.” — Sarah Barshop

Tight end Travis Kelce was a limited practice participant because of a sore knee, making his injury the one to watch for the Chiefs this week. It’s difficult picturing Kelce sitting out a game of this magnitude unless the injury is serious, but if he plays and is limited, that’s a blow to the Chiefs. Kelce led the Chiefs with 97 catches and 1,229 yards this season. — Adam Teicher