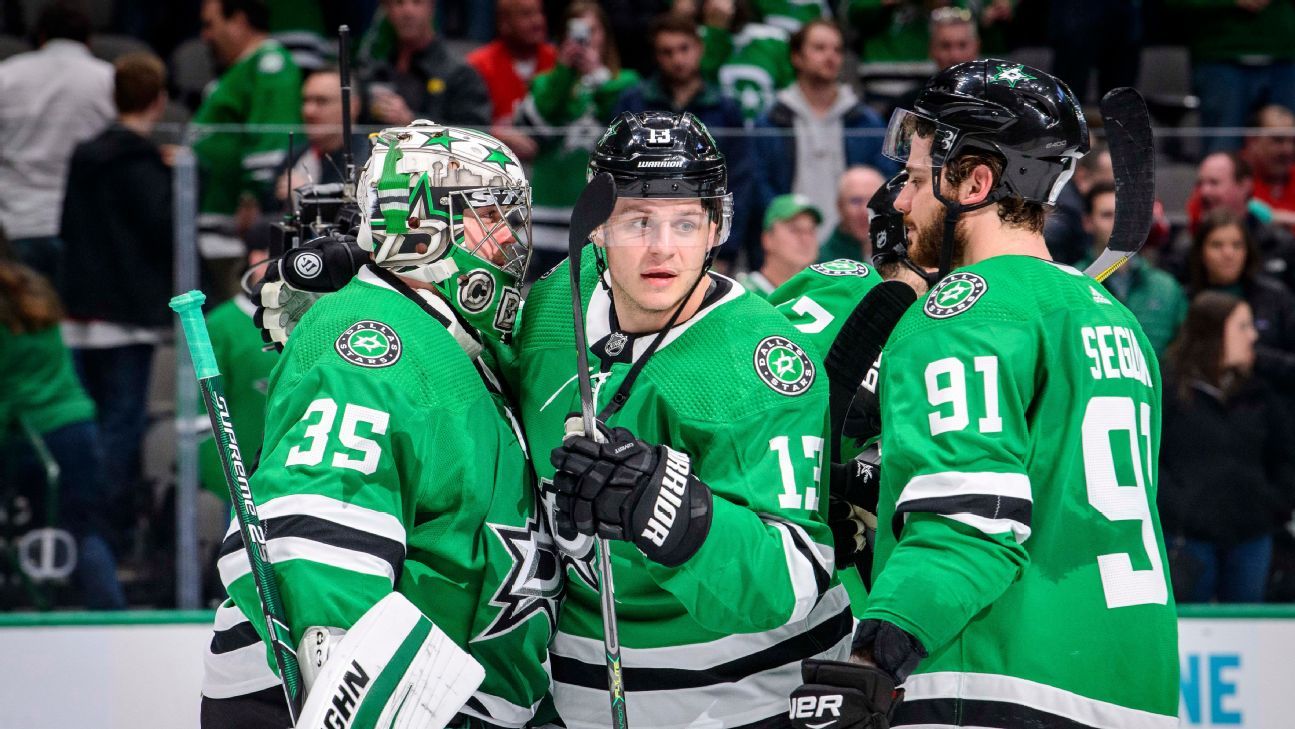 DALLAS — There are 31 head-coaching jobs in the National Hockey League. Rick Bowness has one of them — but he truly wishes he didn’t.

“I’ve been coaching in this league since the early 1980s. I didn’t want to be put in this position,” Bowness, 64, said. “No one saw it coming. It was a complete shock.”

On Dec. 10, 2019, Bowness was named interim head coach of the Dallas Stars after the team fired Jim Montgomery for what general manager Jim Nill called “a material act of unprofessionalism.” The nature of that unprofessionalism remained a mystery until Montgomery revealed in a statement that he was seeking treatment for an addiction to alcohol, calling the Stars’ decision to fire him “a wake-up call [and] also the appropriate call.”

The Fort-Worth Star Telegram reported this week that Montgomery was warned during his first season with the team about his excessive public intoxication, including at a local bar operated by the Stars’ owner. Just 32 games into his second season as an NHL coach, Montgomery was dismissed primarily because of it.

“For every great thing that happens on the ice for this organization, there’s an equal thing that seems to come across our path off the ice,” said Daryl Reaugh, the Stars’ long-time color commentator. “It was a weird firing overall. There’s not really a precedent for it: The team’s going well, you show up one morning, and for some reason, your coach is no longer your coach.”

Montgomery wasn’t the first coach fired this season for off-ice reasons — see Flames, Calgary — but he was the most successful one. His dismissal came with the Stars having made the second round of the playoffs in his first season behind an NHL bench and with them sitting in a Western Conference playoff spot this season, at 18-11-3.

Bowness, the remaining coaches and the players were then tasked with not allowing the season to descend into chaos. It wasn’t going to be easy.

“You know what? It was touch-and-go there for a bit, to be honest,” forward Andrew Cogliano said.

Yet the Stars have powered through, going 7-3-1 under Bowness for a 25-14-4 record and tied for second place in the Central Division.

“When I came to Dallas last year, I came to win a Stanley Cup with Jimmy Nill and Jimmy Montgomery,” said Bowness, an assistant under Montgomery in both of his seasons. “I didn’t come here to be an interim head coach. That wasn’t part of the plan at all. But it falls onto you. And you make the most of it.”

Adversity had already visited the Dallas Stars before Montgomery’s firing made it a distant memory. They entered the season with high expectations, thanks to last season’s success and the addition of players such as San Jose Sharks star Joe Pavelski in the offseason. The Stars began the season in terrible fashion, going 1-7-1 in their first nine games.

They kept the faith.

“We started off so bad that it was a surprise to everyone,” Cogliano said. “It was tough to get through that, but we did — and with flying colors.”

Dallas course-corrected in a major way, winning 14 of 16 games, including a streak of seven that ended on Nov. 25. A little more than two weeks later, their coach was ousted.

Emily Kaplan and Greg Wyshynski take you around the NHL with the latest news, big questions and special guests every episode. Listen here »

“The players were just as shocked as we were, clearly,” Bowness said. “It wasn’t easy on them. Monty was really popular and a great coach. We’ve all adjusted as well as one could have hoped.”

“With the coaching change, that was another bump in the road,” Cogliano said. “I think that’s the benefit of having some older players. We have some guys that have been around for a while. Does that help in those situations? Maybe a little bit. We know how to play as a team and can help other guys along a little bit.”

Dallas has 13 players over the age of 28, including a former captain of the Sharks (Pavelski, 35) and the current captain of the Stars (Jamie Benn, 30). They’ve seen a lot adversity during their time in the league — although, admittedly, not much that compares to the abrupt firing of their coach for off-ice reasons. But even an unexpected event such as that can be processed by a veteran player in a way that allows the team to move on from it.

“Unfortunately, the firing of Monty happens. But in sports, that’s the type of stuff that happens. We responded well. It happened the day of a game, and we went out and won 3-0 in one of our better games of the season,” said Bishop, who is once again one of the league’s top netminders, with a .926 save percentage and a 14-9-3 record.

“It happens in sports. You lose players. Guys get traded. Obviously, it’s your coach, and that doesn’t happen all the time. But even though he’s your coach, everyone has a job to do. The players are the ones that go out there and executive the game plan.”

It also helps when Bowness is the one facilitating that game plan.

He began coaching in the NHL before every player on the Stars was born, save for Pavelski. His first gig was as an assistant coach with the Winnipeg Jets — the eventual Coyotes, not the previous Thrashers — in 1984, and then he became the interim coach in 1989. His next head-coaching job was with the Boston Bruins for one season in 1992-93. Then he coached the expansion Ottawa Senators from 1992 to ’96. He moved to the New York Islanders in 1996 and became their head coach for parts of two seasons. His final head-coaching gig came as an interim coach with the Phoenix Coyotes in 2003-04. In the past 20 years, he also served as an assistant coach for Phoenix, Vancouver, Tampa Bay and Dallas.

“He’s coached more games than anybody else in the NHL,” Bishop said. “It’s nice to have that guy behind the bench.”

Catch 300+ NHL games streaming live or on replay this season on ESPN+. Click here for the upcoming schedule and to learn how to subscribe.

When Montgomery was fired, Nill and his staff sat down to explore their options. Bowness wasn’t the only coach with experience on the bench: John Stevens, former head coach of the Flyers and Kings, is an assistant. So is Todd Nelson, who had a brief stint as an interim coach with the Edmonton Oilers. Derek Laxdal, promoted to assistant coach when Montgomery was ousted, was the Stars’ AHL head coach. But Bowness was handed the keys and told that this would be the Stars’ staff for the rest of the season.

“We’re fortunate. [The assistants] are all very good,” Nill said. “Rick’s been around a long time and did a great job. I think he managed the staff very well. I just think he was the right choice for the organization and where we’re at right now.”

The amount of heavy lifting Bowness had been doing behind the scenes in support of Montgomery wasn’t common knowledge outside the dressing room, according to Reaugh.

“You have a guy like Bones … I don’t want to take anything away from Monty, but he was doing a lot of coaching,” Reaugh said. “Even in his rookie year as head coach, Rick Bowness was doing a ton of coaching. So even though it’s a different voice with the bullhorn, a lot of the things are absolutely the same. Bones is so old-school. He’s seen so much and done so much that I think he’s going to have the trust of the room.”

There is a consistency that Bowness brings to the Stars’ system that has made the transition easier. But there is a difference in tone: Spend a few moments with Bowness, and one easily senses the infectious spirit that has endeared him to players at every coaching stop. Take, for instance, his introductory media conference, in which Bowness said that when coaches are fired, it’s usually because teams are struggling or trying to sell off their assets to tank.

Bishop appreciates the contrast in disposition. “Bones is a little bit more of an upbeat guy. That’s his personality,” he said. “He’s always got a smile on his face. He’s always the guy to say ‘good morning’ the loudest when he walks into a room.”

• The secret life of NHL dentists »
• From mascot to meme to megastar: How Gritty took over the world »
• The NHL’s love affair with hair »
• The struggle is real: Why hockey butts and jeans don’t mix »
• The definitive NHL mascot rankings »

When the sun set on Montgomery, it was anyone’s guess how Dallas would react. But it appears that the Stars promoted the right coach to take over, in support of the players, who have made the transition as seamless as possible.

“After a while … I don’t want to say you forget about it, but you kind of have to, you know?” Cogliano said. “That’s the nature of it. You can’t dwell on it. You have to move on. It was a weird situation, to be honest, and it was unfortunate when it happened, but also we have Bones, and we have the full confidence in him.”

The organization is confident that it can actually become better from this adversity.

“I think today’s player is pretty good at shrugging their shoulders and going, ‘Well, that happened,'” Reaugh said. “I think if you did something like this 15 years ago, it would have been chaotic. Now, for the most part, they’re able to go about their own business. In some weird way, it may actually turn out to be a positive because the internal community galvanizes.”