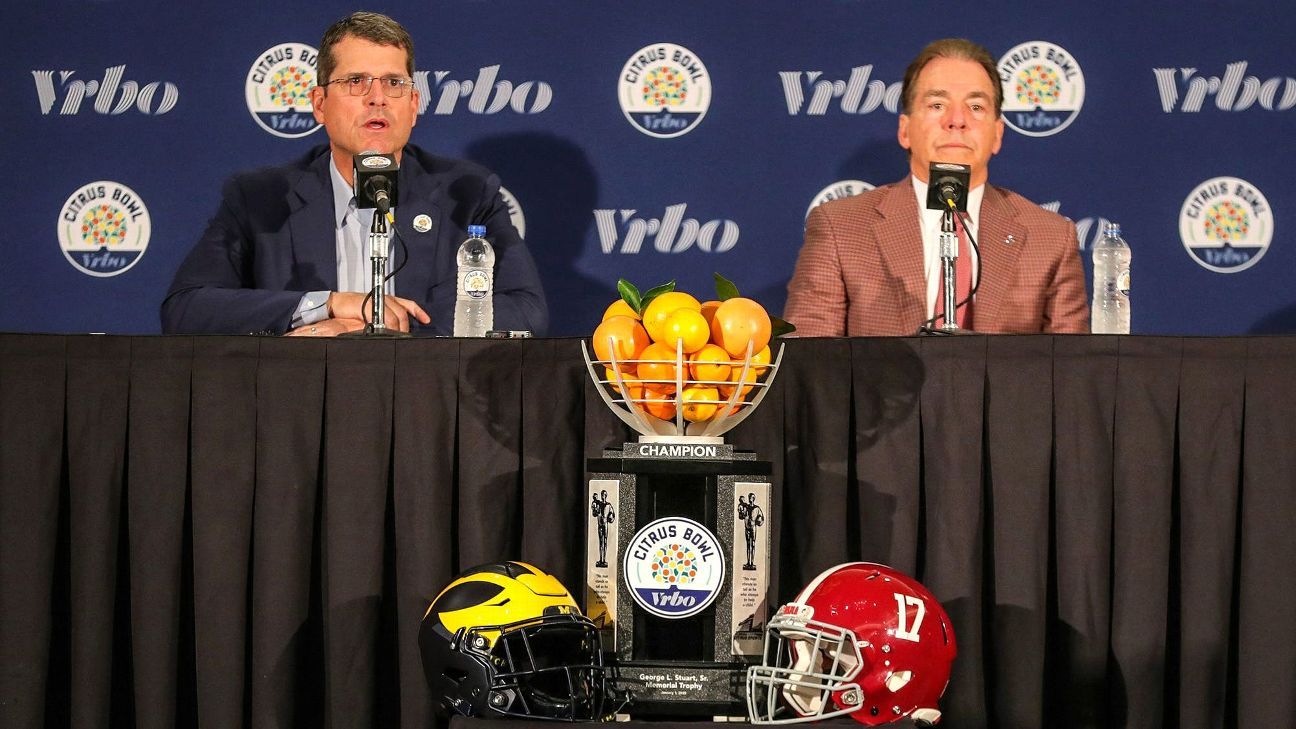 This year’s Vrbo Citrus Bowl has a lot of juice.

Michigan (962 wins) and Alabama (915) rank first and fourth, respectively, as the winningest programs in college football history. They’ve met four times in bowl games, but the last matchup was 20 years ago, a 35-34 Michigan win in the 2000 Orange Bowl. And while the Crimson Tide are making their first bowl appearance outside the College Football Playoff since its inception in 2014, they’re still looking for their ninth straight 11-win season, the longest such streak in the AP poll era.

“Michigan is an iconic program with great tradition,” Alabama coach Nick Saban said this week. “I think if you would’ve said 50 years ago to your grandmother, ‘Is Michigan-Alabama a big game?’ They’d say, ‘Yeah, it’s a big game.’ So it’s a big game.”

But off the field, Saban and Michigan coach Jim Harbaugh are two of the most visible coaches in the country. They’re lightning rods for different reasons. Saban is a fiery competitor who won’t hesitate to let you know where you stand. Harbaugh just does things a little differently.

Before Wednesday’s kickoff (1 p.m., ABC/ESPN App), let’s take a moment to remember a few highlights from the two coaches’ recent history that prove they’re two of the most interesting personalities in sports.

The Judge Judy appreciator logs on

Harbaugh has appeared on Judge Judy’s television court show as an audience member with his father, Jack. He has been vocal about his fondness for her and took to Twitter to congratulate her on a new contract extension and later, to support her nomination to the highest court in the country.

I urge President Obama to nominate to the Supreme Court the wise and competent, Judge Extraordinaire Judith Sheindlin.

You know you can pencil in a Saban rant for sometime early in the season or in mid-November when Alabama is playing a struggling non-Power 5 or FCS team. He’ll get it in his mind that everyone is overlooking the opponent, and he’ll explode. And no explosion was more jaw-dropping than the one in November 2015 before his team was set to play Charleston Southern. Saban was asked a rather innocuous question about Bucs quarterback Austin Brown, and he described Brown as a “really good player” who “does a really good job with his offense” before he went wildly off course. Saban told reporters that people take games like this for granted and just assume the younger guys will play. Then he harked back to a game a few years earlier against Georgia Southern and how poorly his NFL-laden defense played against the triple-option. “You all don’t remember the Georgia Southern game, do you? … They ran through our ass like s— through a tin horn, man, and we could not stop them.”

Very early in Harbaugh’s tenure at Michigan, he was asked about his first spring practice at Michigan and what he was expecting. Harbaugh replied by saying spring practice was like coming out of your mother’s womb, that you are now out in the chaos. While technically it is an apt comparison, it’s probably not the comparison people were looking for.

Remember back when satellite camps were a thing? Who can forget Harbaugh running around shirtless in Prattville, Alabama? Before regulation was imposed and the whole concept of far-flung camps generally fizzled out, it was the topic of college football as Harbaugh and his Michigan staff hit the road during the summer, brazenly parking themselves in the SEC’s backyard in an attempt to reach recruits. Saban was asked about it time and time again in the beginning, until he finally got animated during the SEC’s spring meetings in 2016. He tried to steer the conversation away from any one coach, saying, “I’m not blaming Jim Harbaugh. I’m not saying anything about him.” But Harbaugh was the face of satellite camps, and here was Saban exclaiming, “I’m just saying it’s bad for college football.” The roughly five-minute examination of the pitfalls of satellite camps included Saban pounding the podium at one point and lamenting all the unintended consequences of such recruiting events, calling them the “wild, wild West — at its best.” Not much later, Harbaugh fired back at Saban with this tweet.

“Amazing” to me- Alabama broke NCAA rules & now their HC is lecturing us on the possibility of rules being broken at camps. Truly “amazing.”

Harbaugh hasn’t done anything too odd in recent years on the recruiting trail, but he came out swinging when he was hired. He made a ton of headlines when he decided to take recruiting rules as literally as possible. With in-home visits, Harbaugh realized his visit with a prospect didn’t end until he left, so he decided to spend the night at the homes of both defensive lineman Connor Murphy and kicker Quinn Nordin. He received a welcome from one of Nordin’s neighbors in the form of a sign reminding him of the Spartans’ win in the Michigan-Michigan State game.

Questioning the strength of the Alabama dynasty today is nothing new. Go back to the two-year drought during 2013-14 when Saban’s Crimson Tide failed to play for a national championship and lost back-to-back Sugar Bowls. The doomsday predictions were happening a lot, and Saban was listening. During the 2015 season, Saban delivered a fiery message about how much he believed in his team in spite of what the media might think. “Because if it was up to you, we’re 6 foot under already,” he said. “We’re dead and buried and gone, gone.” Three months later, Saban won his third national championship at Alabama.

The land of milk and steak

Harbaugh’s fascination with milk — whole milk to be specific — has been a fun storyline throughout his time at Michigan. It started with Harbaugh calling skim milk “candyass” and saying he would tolerate 2% milk if he needed to. At a news conference, a young fan asked the coach how much milk he needed to drink to become a quarterback. Harbaugh responded by giving the child a hug and telling him he should be drinking milk at all times and to drink as much as his little belly would hold. Harbaugh expounded on his love for milk on his radio show by saying he takes a vitamin a day. That vitamin? It’s called a steak. “I truly believe the No. 1 natural steroid is sleep and the No. 2 natural steroid is milk, whole milk,” Harbaugh said. “Three would be water. Four would be steak.” Harbaugh eventually signed a contract to endorse a milk company and even helped deliver a baby calf at a dairy farm.

Nick Saban is frustrated about his Crimson Tide players hearing how good they are and doesn’t expect to beat every team by a large margin.

Like his “Tin horn” rant, some Saban rants have a longer shelf life than others. Take what Saban said in 2017 after beating Texas A&M in College Station, Texas. He’d heard all the glowing reviews of his team leading up to the game and how the Tide had won their previous games by a combined 125-3, and he wasn’t having any of it. After beating the Aggies 27-19, he warned against positive headlines. “All that stuff you write about how good we are. All that stuff they hear on ESPN. It’s like poison. It’s like taking poison. It’s like rat poison.” The “rat poison” phrase spawned pins and T-shirts. Saban was given a birthday cake with the phrase written in icing. It even got a callback from him this year when his team returned to College Station and he reminded reporters, “This very seat is where rat poison was born.”

From promposals to the treetops

There were plenty of other headlines from Harbaugh in recruiting outside of the sleepovers, including when Harbaugh mimicked a promposal sign for Boss Tagaloa, trying to convince the California prospect to sign with Michigan. Harbaugh also decided to attend class with Tagaloa at his school, before Tagaloa opted for UCLA. And who could forget when Harbaugh climbed a tree while playing catch with cornerback David Long’s siblings because Long’s younger sister asked the coach if he could do it?

No coach had ever benched his quarterback in the middle of a national championship. But Saban didn’t care that Jalen Hurts was 26-2 as a starter and had won SEC Offensive Player of the Year a season earlier. The passing game was failing in the title game under Hurts’ watch, his team was trailing 13-0 and Saban had to make a move. So he called on the left arm of true freshman Tua Tagovailoa, who hadn’t started a game or thrown a meaningful pass all season. And lo and behold, it worked. Tagovailoa became a star that night in Atlanta, leading a comeback for the ages against Georgia that culminated in a game-winning touchdown pass in overtime. Amid the celebration on the field, Saban said, “I’ve never been happier in my life.”

Harbaugh has embraced his inner rapper, welcoming Migos on campus in Ann Arbor as well as Lil Wayne. He took the stage at a Lil Dicky concert in Ann Arbor and sang the national anthem. Harbaugh also made an appearance in a music video with rapper Bailey in the aptly named song, “Who’s Got It Better Than Us?”. The Michigan coach shouted out rapper G-Eazy while wearing one of the rapper’s hats and retweeted rapper Nicki Minaj, saying he agreed with Minaj that Michigan is their favorite place.

Nick Saban shares how Alabama is finding purpose in its non-playoff bowl game against Michigan.

Saban was unhappy with his then-assistant coach Josh Gattis before Harbaugh and Michigan even entered the picture. Following the end of the 2018 season, Gattis caught an earful from Saban when he broke the news to him that he was planning to become the offensive coordinator at Maryland. “I had just left a meeting with Nick Saban getting my butt chewed out for about 20 minutes telling him I was leaving and he was trying to keep me to stay,” Gattis said. “It did not go over well.” But, as he left his meeting with Saban, his phone rang. It was Harbaugh, who offered him the chance to be Michigan’s OC instead, which he accepted. An assistant leaving under unpleasant circumstances isn’t new. It happens every offseason. But that Gattis aired out a private conversation publicly, and on Harbaugh’s podcast no less, was another matter entirely. If Harbaugh was looking to stick it to Saban, he hit his target.