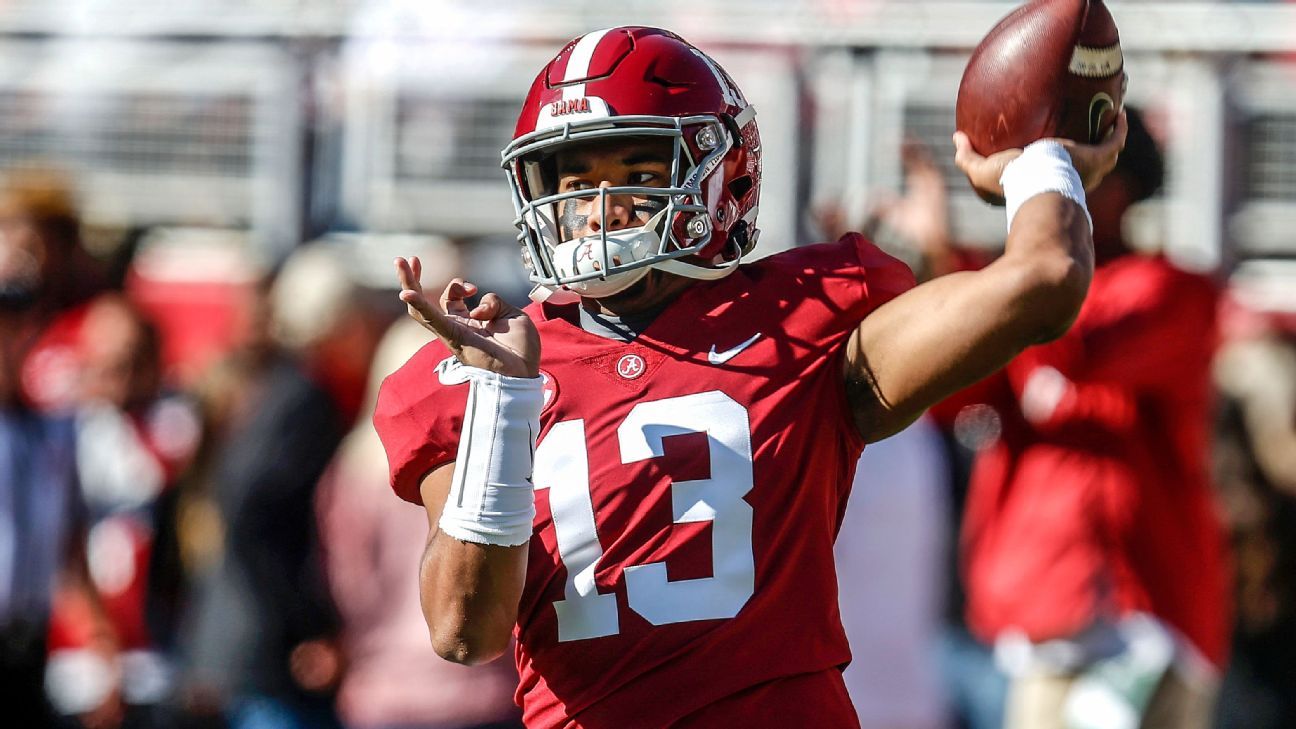 The 2020 NFL offseason began with a huge boom for the Miami Dolphins, when quarterback Tua Tagovailoa announced Monday that he is entering the NFL draft.

No team has been connected to Tagovailoa more over the past year than the Dolphins, whose fans let out collective cheers on social media following Monday’s announcement.

Many of the reasons are clear: Tagovailoa’s unique talent, the Dolphins’ need for a playmaking franchise quarterback and the Dolphins’ bountiful draft assets.

Over the next few months, quarterback-needy NFL teams will probe Tagovailoa’s medicals as he recovers from a dislocated right hip and posterior wall fracture suffered on Nov. 16, and speculation about where the talented Alabama star will be selected in April’s draft will run rampant. But the Dolphins, armed with the No. 5 pick, hold many of the key cards, assuming the Cincinnati Bengals draft LSU quarterback Joe Burrow with the No. 1 overall pick.

If there’s an early handicap, the Dolphins should be considered the favorites to land Tagovailoa. The link has been strong since the “Tank for Tua” push increased around this time last year. The path is clear for Miami — if Tagovailoa is what it wants.

Dolphins general manager Chris Grier has scouted at least four Alabama games this season, including at least two with owner Stephen Ross. Grier, Ross and Dolphins CEO/president Tom Garfinkel were seen on the sideline talking to Alabama coaches with Tagovailoa nearby before the Jan. 1 VRBO Citrus Bowl between the Crimson Tide and the Michigan Wolverines.

Tagovailoa, who stood without crutches on Monday at the Alabama lectern, jokingly said he has talked to “too many” general managers and owners since being injured. Given their game appearances, Grier and Ross are likely included in that group.

Much of the discussion, Tagovailoa said, has centered on whether he can return to being the same electrifying player.

“It’s a unique situation,” Tagovailoa said. “With my hip, a lot of the GMs and owners I got to talk to said the same thing: They look at this injury like a knee injury, even though it’s not. In a way, ‘Are we going to take a chance on this guy, or will he be able to do a pro day before the draft?’ The biggest thing they want to do is just see that we can move and we can be back to how we were playing before the injury.”

All eyes are now on Grier and the Dolphins to decide if they are willing to bet on a talented quarterback with a murky injury history. A week ago, at his season-ending news conference, Grier insisted that the Dolphins do not have to draft a quarterback in 2020.

“I’m not trivializing the quarterback position,” Grier said. “Quarterback — we understand that’s the focus for everybody — but we’re going to go through the process and make smart decisions and work through it and do what’s best for the organization.”

Grier’s stance seems to be the first step of what could end up being a cat-and-mouse game surrounding Tagovailoa leading up to the draft. The Dolphins have to create the impression that they don’t need to select Tagovailoa or any 2020 quarterback so that they aren’t fleeced into making an unnecessary draft-day trade up to secure their man.

After the Bengals’ pick at No. 1, the teams that hold picks No. 2 through No. 4 (Redskins, Lions, Giants) don’t seem likely to draft a quarterback. But Tagovailoa’s declaration could increase the value of those picks for a team trying to trade ahead of the Dolphins to draft him. Grier has already said the Dolphins have the draft capital to do what they want, and that’s where the cat-and-mouse game comes in.

Tagovailoa met with doctors last weekend, and he said doctors “can’t tell the foreseeable future” until the three- or four-month mark of his injury, but the feedback was positive. Dr. Lyle Cain, Alabama’s orthopedic surgeon, said after the surgery that Tagovailoa’s injury prognosis was “excellent,” and he was expected to make a full recovery.

“I’m optimistic that I’m going to be able to play this upcoming [NFL] season,” Tagovailoa said Monday. His main focus is rehab and scheduling a pro day for NFL teams before the draft. Then he will see which team is willing to take a chance on him.

The Dolphins have other needs, such as offensive line, edge rusher and running back. But nothing impacts a rebuilding team more than finding its franchise quarterback.

There are other quarterback routes for Miami. In 2020, Oregon’s Justin Herbert, Utah State’s Jordan Love and Washington’s Jacob Eason all project to be first-round prospects with cleaner injury histories. Should the Dolphins punt on drafting a first-round QB this year, the 2021 draft also has intriguing quarterback options, such as Clemson’s Trevor Lawrence and Ohio State’s Justin Fields.

But if the Dolphins love Tagovailoa, they should get him now. If they fall in love with Herbert, Love or Eason, all three should be available at No. 5, too.

Miami is the only team with three first-round picks in the 2020 draft. Its selections are at No. 5, No. 18 (via Pittsburgh) and somewhere between No. 25 and No. 32, depending on how the Houston Texans finish the 2019 season.

This is a long-term process for the Dolphins, a team with a quarterback need and the patience to allow Tagovailoa to conservatively rehab through the 2020 season, if needed. Rolling with Ryan Fitzpatrick in 2020, all while Tagovailoa improves his health and learns behind the veteran, could be a plan.

“I don’t know how I feel right now. I’m content with the decision that I made,” Tagovailoa said. “It’s more so what’s next with this process.”

That three-month process ends with the Dolphins deciding whether they want to tie the knot with a player they have long admired in Tagovailoa. The Dolphins-Tagovailoa connection is more realistic than ever before.