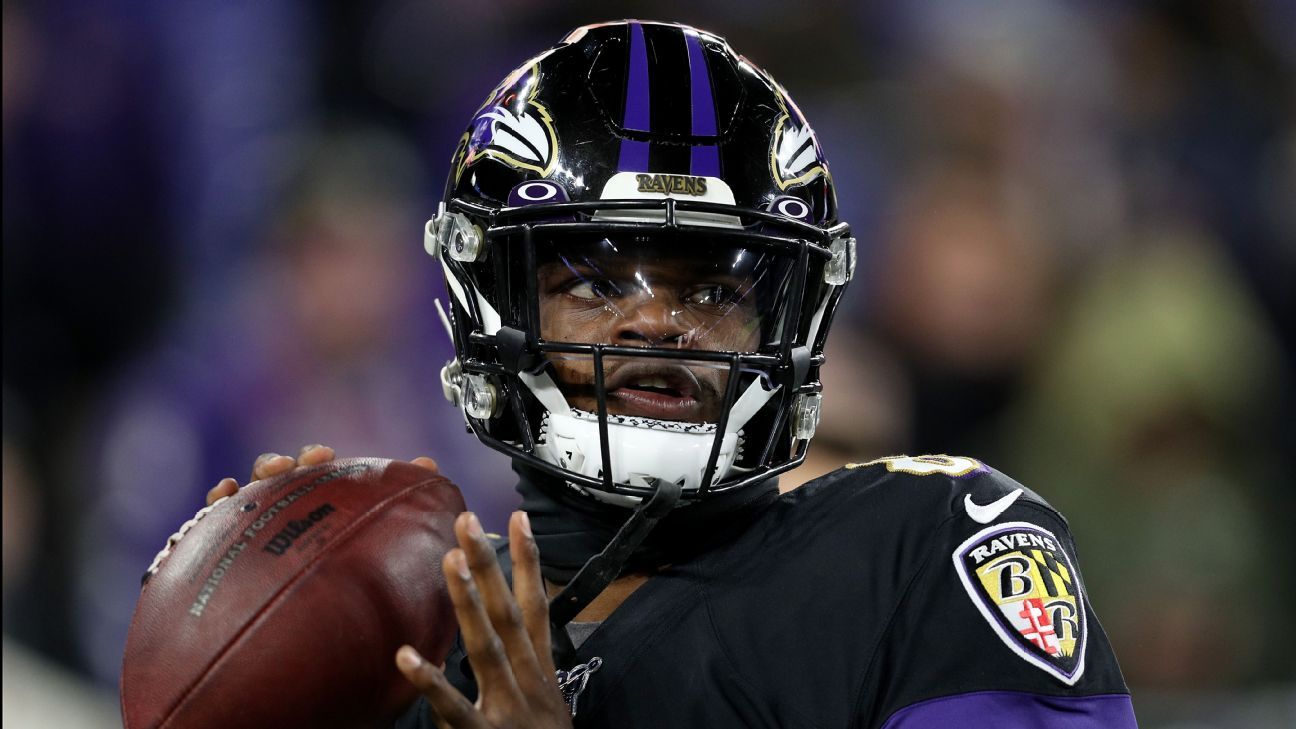 NASHVILLE, Tenn. — After knocking Tom Brady and the defending champion New England Patriots out of the playoffs, the Tennessee Titans face what might be a tougher task: slowing down quarterback Lamar Jackson and the Baltimore Ravens‘ offense, which leads the league at 33.2 points per game.

“Offensively, near the top in almost all statistical categories,” Titans coach Mike Vrabel said on Monday. “Offensively, they have the best player in the league who’s impossible to tackle. It’s a great scheme. I think on any other day it’d be fun to watch, but not when you’re trying to prepare for them and stop them. [Ravens offensive coordinator] Greg [Roman] does a fantastic job.”

Jackson was the league’s leader in touchdown passes (36) and ran for 1,240 yards, making a strong MVP case. Baltimore averaged 407.6 total yards per game, including an NFL-best average of 206 yards per game on the ground. Roman orchestrated an attack that showcases Jackson as a playmaker. So, what are some things the Titans can do on Saturday (8:15 p.m. ET, CBS) to limit Jackson’s dual-threat ability?

Control the line of scrimmage

The Ravens’ offensive line has imposed its will on defenses. It has allowed 28 sacks this season and plays a significant role in Baltimore’s rushing attack.

The interior players along the Titans’ defensive line need to make sure they don’t get blown out of the gaps they’re assigned to protect. Defensive tackle DaQuan Jones will be asked to occupy two gaps at times. That’s especially important against a running back like the Ravens’ Mark Ingram, who is one of five backs to average over 5 yards per carry (5.1) between the tackles. Fellow Ravens back Gus Edwards has 69 fewer carries, but he averaged 5.3 yards between the tackles. If the Ravens’ offensive line can blow Tennessee’s front off the ball, it will be a long day for the defense.

The same thing applies to the passing game. Jackson isn’t a typical pocket passer like Brady, but it will be just as essential to create an interior pass rush. Unlike when it’s in run defense, the Titans’ front can generate the contact since the offensive line is dropping into its pass set. The Titans have to find ways to collapse the pocket when rushing the passer without giving Jackson a lane to escape.

It will be critical to force Jackson to move off his spot by matching the interior pass rush with the defenders who rush from the outside. Think of lions teaming up to hunt gazelles by having one group flush the prey into another group waiting to pounce. The edge defenders have to be careful not to rush too far up the field, so they don’t take themselves out of the play, but they have to get deep enough to force Jackson to step up in the pocket where the interior guys are pushing it back.

Once Jackson gets to the outside, he is an extremely dangerous runner. Baltimore has had success with zone-read plays in which Jackson has the option to give the ball to the running back on a dive or pull it back if he thinks he can turn the corner. The defensive players on the edge will sometimes crash down to stop the dive, leaving Jackson with plenty of space to get outside and pick up chunks of yardage.

When Titans defensive coordinator Dean Pees was with the Ravens, he faced the San Francisco 49ers in Super Bowl XLVII. Pees found success early in the game by using linebacker Terrell Suggs in a more tilted alignment to aggressively set the edge and lay a hard hit on 49ers quarterback Colin Kaepernick regardless of whether he ran with the ball. That’s what the Titans need to do with one of their edge defenders to make Roman think twice about using the zone-read and exposing Jackson to hits (though with stricter rules protecting quarterbacks, that strategy isn’t without risks).

Dean Pees faced Greg Roman in the Super Bowl a few yrs back. Here’s one way they defended the zone read back then. The rematch is coming this weekend in #Titans #Ravens. pic.twitter.com/W8MwvFrrdm

Pees could further set the edge by utilizing physical defensive backs such as Logan Ryan and Kenny Vaccaro to help keep plays flowing back inside between the tackles.

Jackson is a dangerous passer to any level of the field. His explosiveness as a runner makes it difficult to defend his passing ability. There’s a risk when going to man defense because the defenders have their backs turned to Jackson, who can easily sneak out of the backfield and pick up yards running the ball.

Added Vrabel, “[Jackson] is athletic enough to buy time when he has to move around. He throws the ball from different arm angles. Watch him improvise and make plays when there are guys there. Not sure that that’s how they drew up the play, but that’s what this league’s about is guys going out there and making plays. He’s a special player.”

One way to combat the Ravens’ passing attack is to condense the field. Pees has successfully used Ryan on blitzes in sub-packages. Ryan does an excellent job closing on the quarterback, and he could be a big tool for Tennessee on Saturday.

Emory Hunt of Football Gameplan suggests using a defensive back like Ryan on the blitz and mixing things up on the back end in coverage.

“Blitz [Jackson] from his right side and force him left. Shrink the field in half,” Hunt said. “Play man on one side and zone on the other side. Mix it up. Play man on the blitz side and zone on the other side that you try to flush him to with the blitz. Take away half of the field. This way, you have coverage and quick pressure off the edge. It’s going to have to be a combo of things.”