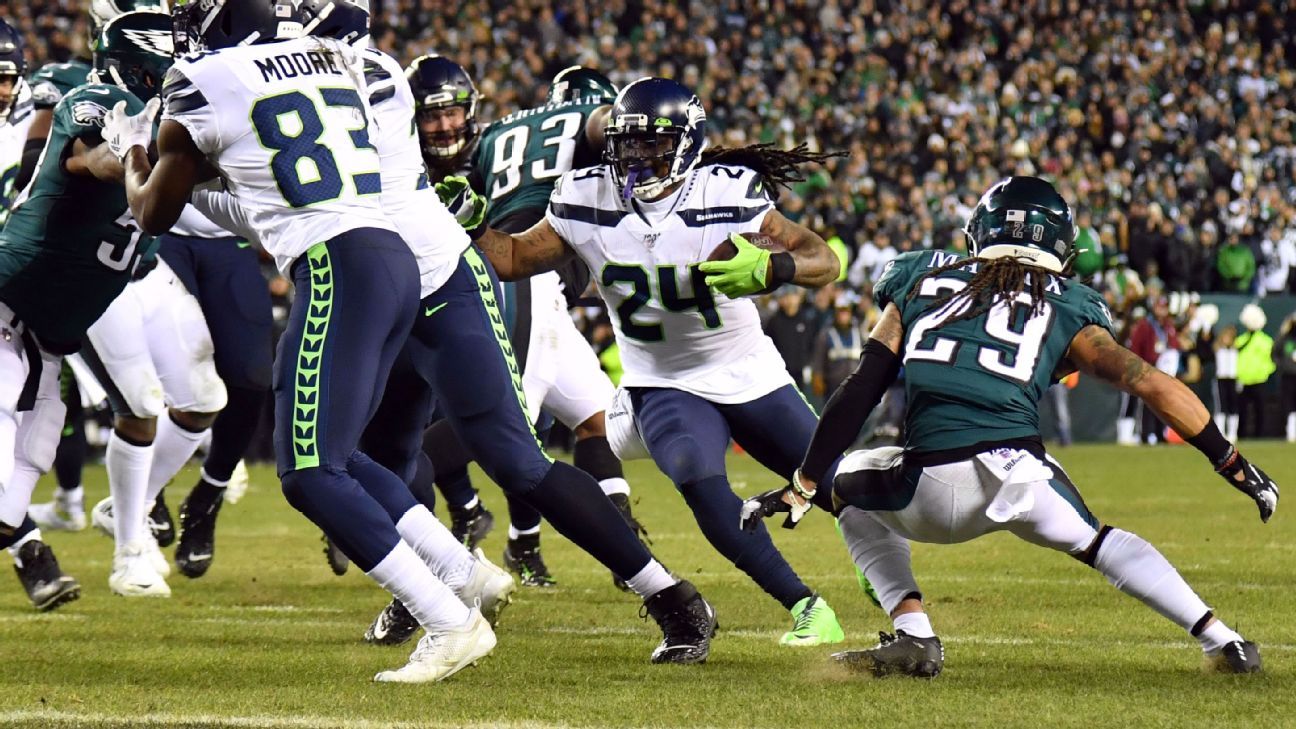 The Seattle Seahawks‘ game plan for this week’s divisional-round matchup with the Green Bay Packers will include more Beast Mode.

Coach Pete Carroll said as much Monday, first in his morning radio show on 710 ESPN Seattle and again in his afternoon news conference. Marshawn Lynch has backed up rookie Travis Homer in each of his first two games since re-joining the Seahawks in Week 17, playing a combined 41 offensive snaps compared to 94 for Homer.

“He’s going to play more this week,” Carroll said. “He’s ready to and he’s had enough time with us. He feels confident about what he’s doing and the plan. We can get him in and out of there and have those two guys really go at it.”

Lynch scored his second touchdown in as many games in the Seahawks’ wild-card win over the Philadelphia Eagles Sunday night. He also had a 20-yard reception that converted a third-and-1 two plays before DK Metcalf’s touchdown.

“They’re really good,” Carroll said of the Eagles’ run defense. “They did really well. They loaded it up. They took a lot of shots at us. They brought guys off the edge to try to stop the running game. They’ve been a real committed run team all year. They gave up 90 yards a game rushing all season long, so they’re really good at it. We weren’t able to counter it like we had thought. We thought we’d put the ball in the perimeter a little bit on them and try to balance them out, but we didn’t get much out of that either. That’s just the way it went.”

It didn’t help that the Seahawks were dealing with injuries along their offensive line that left them without both of their primary backup tackles and thus unable to employ the heavy packages that have become a staple of their offense. George Fant typically fills that role, but he had to fill in for Duane Brown at left tackle. Jamarco Jones replaced Mike Iupati at left guard.

Carroll said Iupati was still dealing with symptoms of his neck stinger on Monday. Defensive end Ezekiel Ansah left Sunday’s game after re-aggravating his stinger. Carroll didn’t know what the status would be for those two this week nor for Brown, who had a minor knee surgery two weeks ago. Wide receiver Jaron Brown is back with the team after missing the Eagles game to attend to a family situation.

Carroll admitted last week to being surprised by how well Lynch bounced back physically from Seattle’s loss to San Francisco in the regular-season finale, which was his first game in 14 months. The Seahawks re-signed Lynch and Robert Turbin after losing Chris Carson and C.J. Prosise to season-ending injuries in Week 16. Rashaad Penny went on IR earlier in December.

Lynch hasn’t been on the injury report since his return, indicating full participation in every practice.

“We’re really pleased that he’s able to take the additional reps,” Carroll said. “He feels great. He’s doing fine. … We were taking this one day at a time. It’s been nothing but positive. It’s been such a positive experience. A great choice by [general manager John Schneider] to get this thing worked out. Give credit to Marshawn for the way he’s attacked this thing. He’s really going for it. He’s doing everything our fans would hope he would do. He’s trying to be everything in all aspects of it. He’s deserving of seeing some more reps. That’s all.”

Carroll weighed in on Jadeveon Clowney’s hit on Carson Wentz that knocked the Eagles’ quarterback out of the game for good, saying there was no ill intent.

“He hit him in the back of the head, but he wasn’t trying to hurt him or anything,” Carroll said. “That just happened. It’s football and unfortunately, he got banged. Hate that he didn’t get to play the game. I don’t know. I don’t know why there’s much discussion about it. I mean, the guy is chasing, and he dove on the guy and hit him. It’s unfortunate.”

Carroll said Clowney is expected to play this week with the core-muscle injury he’s been dealing with since Week 10. The Seahawks will need him as they try to snap an eight-game losing streak (regular season and playoffs) at Lambeau Field, where they last won in 1999.

“There’s no tougher place to play than going to Green Bay,” Carroll said. “We’re as ready as you can get. I like that.”