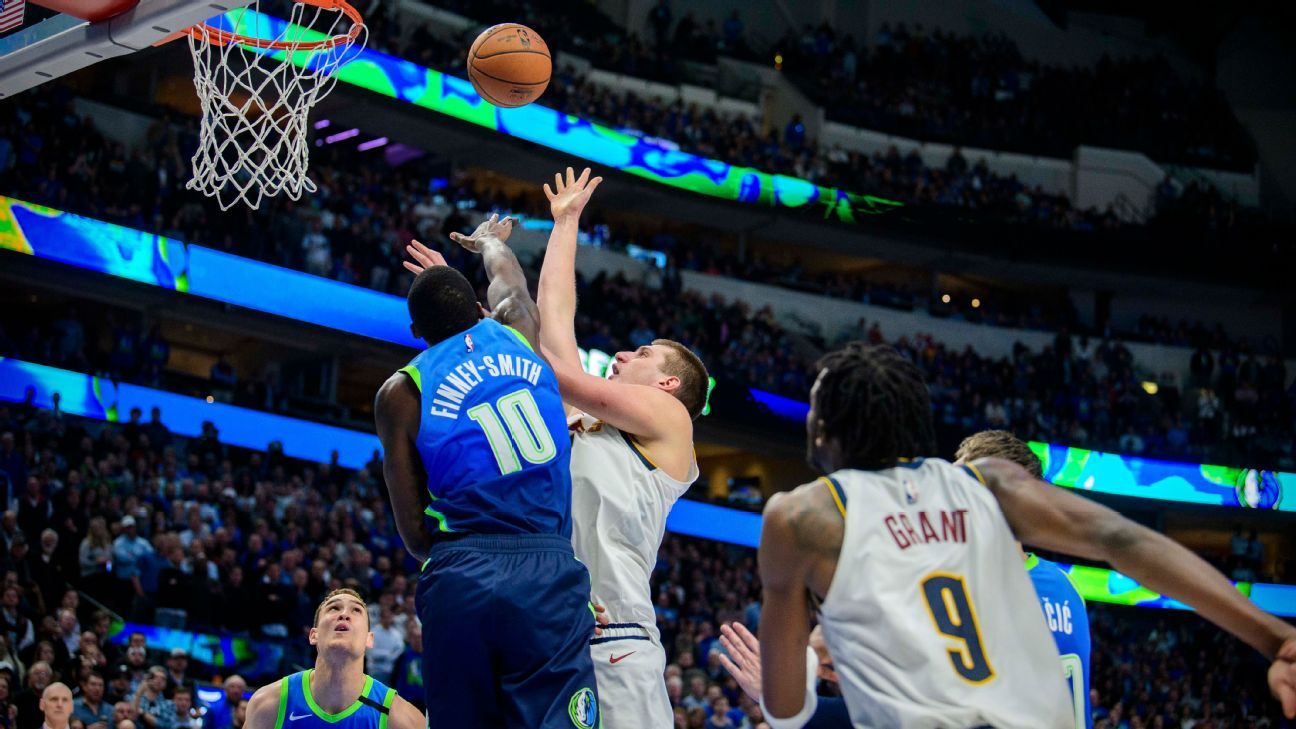 DALLAS — This situation certainly was not what Dallas Mavericks coach Rick Carlisle had in mind recently when he emphatically declared that the “post-up just isn’t a good play anymore.”

Nor was it how the Mavericks wanted to defend All-Star center Nikola Jokic with the game on the line.

The 7-foot, 284-pound Jokic punished the Mavs for defending him 1-on-1 with a much smaller defender, scoring the game-winning basket in the Denver Nuggets’ 107-106 victory Wednesday after backing down 6-foot-7, 220-pound Dallas forward Dorian Finney-Smith.

“I figured out that I have a mismatch,” said Jokic, who finished with 33 points on 12-of-20 shooting. “I just wanted the ball to try to score.”

Jokic capitalized on the situation after Dwight Powell and Finney-Smith switched earlier in the possession by re-posting after passing out to point guard Jamal Murray. The only help the Mavs sent was a late swipe by Powell that had no effect as Jokic pivoted from the right block into the middle of the paint and finished with a right-handed layup with 7.9 seconds remaining.

“It’s me. It’s my responsibility,” Carlisle said of Dallas’ defensive breakdown on the play. “I’m not going to get into explanations, but we didn’t handle it well. That’s on me. I’ve got to do a better job.”

Jokic, who was coming off a 47-point performance in the Nuggets’ win in Atlanta on Monday, was a dominant force in the second half. He scored 26 of his 33 points against the Mavs in the second half. He had 21 points on 8-of-11 shooting in the third quarter, the highest-scoring quarter of his career, according to ESPN Stats & Information.

Jokic went 4-of-6 from 3-point range, with all the attempts coming in the third quarter, but he did much of his damage from the post. He was 6-of-10 on post-ups, including two buckets over Finney-Smith as the Nuggets rallied in the final two minutes of the game.

“I just wanted to be aggressive,” said Jokic, who also had six rebounds and seven assists. “I think I missed a couple easy ones in the first half and I just tried to be aggressive. My teammates were passing me the ball and telling me to shoot. I was just trying to be aggressive and score as much as possible.”

The Nuggets held the Mavs scoreless for the final two minutes, 20 seconds, a continuation of the Mavs’ clutch scoring problems. Dallas has the NBA’s top-ranked offense — its offensive rating of 115.3 points per 100 possessions is the best in league history — but ranks 28th in clutch scoring (91.0 points per 100 possessions in the final five minutes with the score within five points, per NBA.com/stats).

Mavs superstar Luka Doncic finished with 27 points, nine rebounds and 10 assists, but he was scoreless in the fourth quarter. For the second time this season, a frustrated Doncic left the arena without speaking to the media.

Doncic missed two shots in the final two minutes — a stepback 3-pointer and a contested layup off a drive, both with the Mavs protecting a one-point lead. Denver doubled Doncic on the final possession, forcing the ball out of his hands, and the Mavs failed to get a shot up before the buzzer.

“Execution, recognition, whatever you want to call it,” Carlisle said when asked what went wrong. “Look, you saw what happened. They created a situation where he had to get rid of the ball and we didn’t do a good job driving and kicking.”

Carlisle’s rant against post-ups after a Dec. 26 win over the San Antonio Spurs was in response to a question about ex-player broadcasters — specifically Chris Webber, Charles Barkley and Shaquille O’Neal — imploring the Mavs to get Kristaps Porzingis the ball on the block more often.

The Mavs have a historically efficient offense despite the 7-foot-3 Porzingis’ ineffectiveness as a post-up player, preferring to use him as a 3-point threat to space the floor. Porzingis, who missed his fifth consecutive game due to right knee soreness, averages only 0.57 points per possession and shoots 27.9% on post-ups, according to Synergy data. Both of those figures rank last among the 25 players with at least 75 post-up possessions this season.

Jokic, on the other hand, averages 1.00 points per post-up possession and shoots 53.3% in those situations, both ranking among the best figures for high-volume post players. He’s also the NBA’s premier passer out of the post, which makes double-teaming him challenging.

According to ESPN Stats & Information, Jokic’s 11 post-ups against the Mavs were his most in a game this season. The 13 points he scored out of the post tied for this third-most this season.

The final play was a classic case of bully ball, as Jokic used his five-inch, 64-pound advantage to score easily.

“He took his time and scored against a smaller guy in the post,” Nuggets coach Mike Malone said. “He’s our go-to player, he’s an MVP candidate for a reason. At the end of games, the ball will be in his hands to make the right play, and tonight it was to score.”