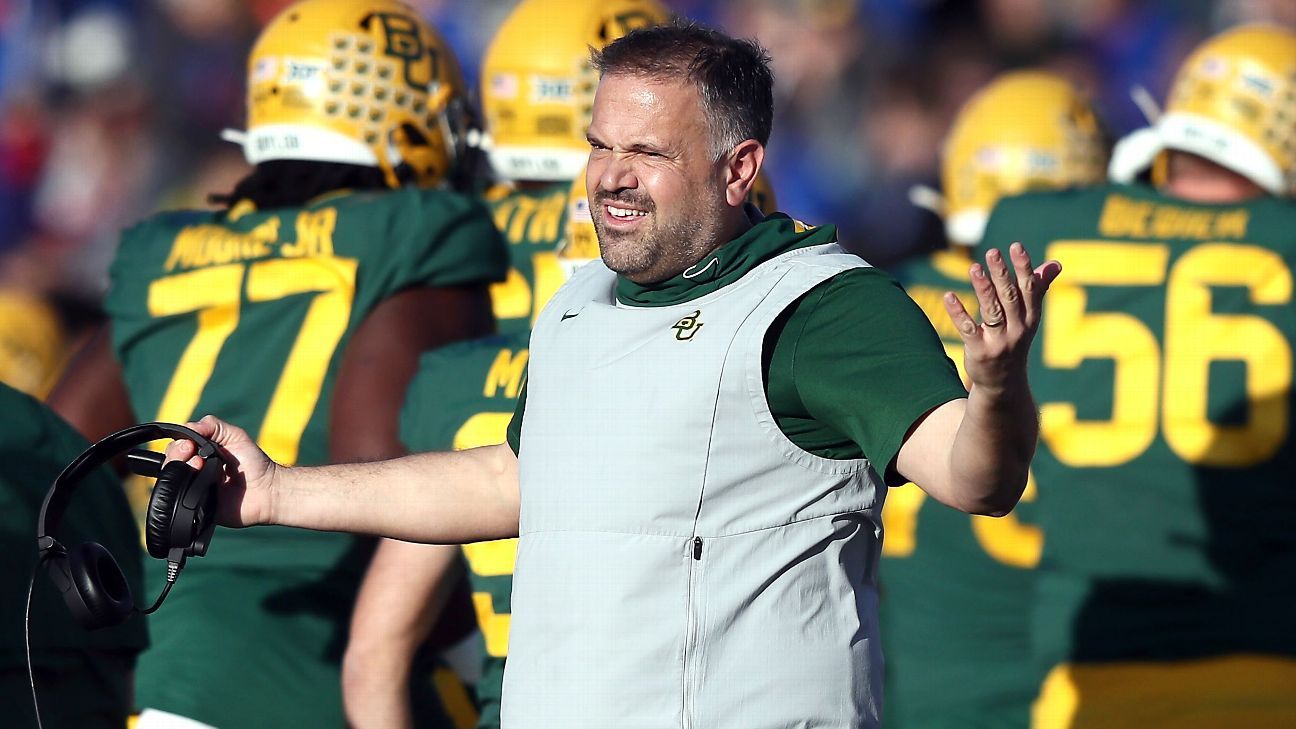 CHARLOTTE, N.C. — Carolina Panthers owner David Tepper is a risk-taker. From a middle-class family in Pittsburgh, he’s now worth $12 billion after making his fortune in the hedge fund business.

That philosophy helps explain why Tepper is hiring Baylor coach Matt Rhule to be the team’s next head coach.

Rhule is risky because he has only one year of experience in the NFL — in 2012 as an offensive line assistant with the New York Giants. He’s risky because only three years ago he was the coach of a 1-11 team in his first season at Baylor, which was recovering from a sexual assault scandal under the previous staff.

Tepper didn’t just take a risk on the 44-year-old Rhule. He took an expensive one, giving him a seven-year deal with incentives that could be worth up to $70 million, according to ESPN’s Adam Schefter. Plus, the Panthers are paying a $6 million buyout of Rhule’s contract with Baylor, league sources told Schefter.

He has deep pockets, particularly when he believes in something.

Tepper saw something in Rhule during his Monday interview in Waco, Texas, and it’s something former Kansas State coach Bill Snyder saw during an 0-5 start to Baylor’s 2017 season. It was something that prompted Snyder to write a handwritten note after his team handed Baylor a 33-20 loss.

The note said: “I’ve seen weekly improvement from your program & appreciate your players for never giving up & fighting back. You are instilling an attitude that will bring success back to your program. Wishing you continued success & good fortune. –Bill.”

So Snyder wasn’t surprised at all when told Rhule would be the next coach of the Panthers, a team that ended the 2019 season on an eight-game losing streak, one that has had only one winning season in the last four, one that is three years removed from accusations of sexual and racial workplace misconduct by former owner Jerry Richardson.

“He’s fearless,” Snyder told ESPN.com. “It doesn’t scare him a bit to step into that position. He likes a challenge, invites one.”

There are a lot of challenges ahead for the Panthers. Here are a few questions they face:

What does Rhule’s hiring mean for Cam Newton?

Let’s get right to the biggest offseason question for the Panthers. Tepper said after firing Ron Rivera on December 3 that Newton, if he fully recovers from Lisfranc surgery, still could lead Carolina to a Super Bowl. Full recovery remains a big question even though early signs have been positive.

What’s significant here is the Rhule hiring feels like a step in a complete rebuild, similar to the rebuild Rhule did at Temple and Baylor. You don’t completely rebuild with a 30-year-old quarterback entering the last year of his contract, particularly one who has taken as many hits as Newton since 2011.

Rhule began his rebuild at Baylor by signing Charlie Brewer, a somewhat undersized (6-1, 188) pro-style quarterback who was efficient at the run-pass option (RPO) that has become prevalent in the NFL. That sounds more like 2019 third-round pick Will Grier and Kyle Allen, Newton’s backups last season.

And remember, the Panthers have the seventh pick of the draft, so Rhule has an opportunity to select a player right away to build around as Rivera did in 2011 when he selected Newton with the top pick.

So signs point toward the end of the Newton era at Carolina.

Will Rhule be expected to win immediately?

Tepper also is smart enough to know it takes time to build what he was used to when growing up as a Pittsburgh Steelers fan.

That Rhule got a seven-year deal shows Tepper is willing to be patient. Rhule is patient, too. His favorite slogan while rebuilding Temple and Baylor was “trust in the process.”

Why Rhule, why now?

Tepper cleaned house on the business side of the Panthers almost immediately to change the culture that left a black mark on Richardson’s legacy. Baylor hired Rhule one season after former coach Art Briles was fired after a sexual assault scandal involving players in the program.

Rhule helped to change the culture at Baylor, and Tepper is looking for a change in the culture at Carolina. Rhule also is big into sports science and wants to take that commitment to the NFL. Tepper is a believer in analytics, so expect that to be a focus going forward.

It is too early to say, but don’t expect him to go after the so-called big names for the sake of them being names. He’ll likely hire the best people that fit his system from the NFL and college ranks. At Baylor, with no experience recruiting the state of Texas, the New York native hired three high school coaches to help with the transition. His first big hire was David Wetzel, the president of the Texas High School Coaches Association.

Who will Rhule report to?

All indications are Rhule has been given complete authority and would have nobody between himself and the owner. That doesn’t mean current general manager Marty Hurney won’t have a say-so in things. But Tepper said initially he wanted the next coach to have a say in who is hired to work with Hurney, likely more on the pro side while Hurney focuses on college scouting.

“It would have surprised me if Matt had taken that position without having control over the hiring,” Snyder said. “He will make wise choices.”

When Tepper described his vision for the next coach, he said the goal was to “find the right mix of old-school discipline and toughness with modern and innovative processes.” That fits Rhule to a T, which is why McCaffrey should be excited.

Rhule initially was known for being a smashmouth coach, probably from his background as a linebacker at Penn State. He then became a believer in the RPO, jokingly calling it his “deal with the devil.”

McCaffrey is smashmouth and RPO all rolled into one. This past season he became the third player in NFL history to have 1,000 yards rushing and receiving in the same season. He was as effective running between the tackles as he was catching a pass out of the backfield. That won’t change.

Putting together a staff and getting busy on evaluation of college talent before the Senior Bowl and NFL scouting combine. Having Hurney in place helps tremendously.

No announcement has been made on whether Norv Turner will remain on the staff, but as a former head coach he could be a help in the transition.